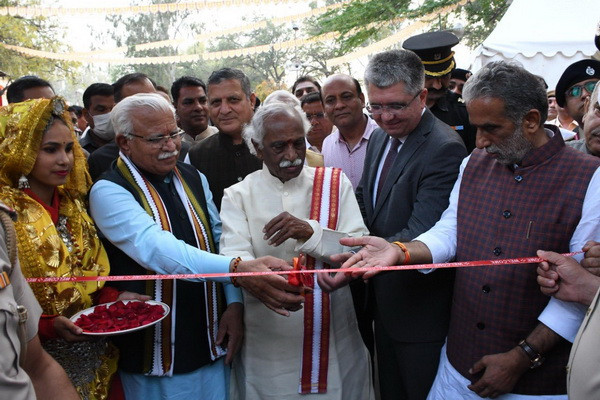 Tashkent, Uzbekistan (UzDaily.com) -- The opening ceremony of the traditional International Craft Festival Surajkund International Crafts Mela-2022 was held on 19 March 2022 in Faridabad, Haryana, India. In cooperation with the Ministry of Tourism of the Republic of Uzbekistan, the Hunarmand Association and the Embassy of Uzbekistan in India, our country participates in the festival as a "partner country".

In accordance with the traditions of the festival, which has been held annually for 35 years, the central part of the exhibition area is dedicated to the "partner state" - the pavilion of Uzbekistan. The pavilion was decorated in the spirit of our national cultural traditions, and it displays products of various folk crafts.

The Ministry of Tourism of the Republic of Uzbekistan also organized a “Tourism & Travel Information” corner in the pavilion, placing banners reflecting the tourism potential and handicraft traditions.

Then, an official cultural event took place on the stage of the amphitheater located on the central square of the festival.

Speaking at the ceremony, Indian officials highly appreciated the close cooperation between Uzbekistan and India and thanked for their active participation in the festival.

In particular, Chief Minister of Haryana Manohar Lal said that the Surajkund Craft Festival has been held since 1987, and Haryana is particularly proud of the participation of artisans and artists from around the world. Noting that the diplomatic and cultural ties between India and Uzbekistan date back to ancient times and are rich, close and strong, “we want to develop interaction with Uzbekistan not only in the G2G and B2B formats, but also to strengthen the H2H ties - "Heart to Heart" (connecting hearts), he said. The head of the government of Haryana also noted that the participation of Uzbekistan in the festival as a “partner country” will provide an excellent opportunity for more than two weeks to demonstrate to the Indian people its rich culture and traditional crafts, art, musical heritage, as well as tourism potential.

Speaking at the opening ceremony, Ambassador of Uzbekistan to India Dilshod Akhatov thanked the governments of India and Haryana for the invitation to take part in the event as a "partner country". The special symbolism of the festival during the celebration of the 30th anniversary of the establishment of diplomatic relations between Uzbekistan and India, the spring holiday of Navruz and the Indian festival of Holi was noted.

The special significance of the festival was noted within the framework of the agreements reached during the "virtual summit" of the leaders of Uzbekistan and India in December 2020, in particular, on the establishment and development of direct ties between Ferghana region and the state of Haryana. The participants were also informed about the first International Gold and Jewelry Festival, which will be held in Bukhara in May this year, and were invited to participate in it.

Songs and dances performed by the national dance and music group from Khorezm region were warmly welcomed by more than a thousand spectators who took part in the opening ceremony.

Surajkund International Crafts Mela-2022 Festival runs from 19 March to 4 April 2022 and is expected to attract over 1 million visitors. This year, representatives of more than 30 foreign countries and almost all states of India will take part in the festival with their handicrafts and applied arts.

Detailed information about the festival, including the active participation of representatives of Uzbekistan, is covered in almost all major Indian media, including The Times of India, The Tribune, The Indian Express, The Print, The Statesman and a number of other publications, on television and radio.