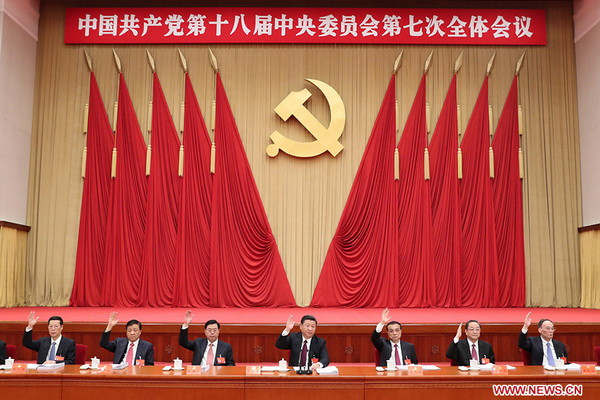 BEIJING, Jan. 6 (Xinhua) -- The Standing Committee of the Political Bureau of the Communist Party of China (CPC) Central Committee on Thursday held a meeting to hear a series of work reports.

Xi Jinping, general secretary of the CPC Central Committee, presided over the meeting and delivered an important speech.

"To govern our Party, which has 95 million members, and our country, which has more than 1.4 billion people, we must uphold the Party’s overall leadership, especially the Central Committee’s centralized, unified leadership," read a statement issued after the meeting.

It said the CPC leadership’s annual hearing of the work reports has set an example for upholding the Party’s overall leadership as well as the authority of the CPC Central Committee and its centralized, unified leadership, noting that such a practice must be continued in the long term.

Noting that 2021 was a landmark year for the Party and the country, the meeting acknowledged the achievements made by the leading Party members groups of the top legislature, state council, top political advisory body, top court and top procuratorate, as well as the Secretariat of the CPC Central Committee, in various areas of work.

The statement stressed the importance of 2022 as China has embarked on a new journey toward realizing the second centenary goal of developing China into a great modern socialist country by the mid-21st century.

The leading Party members groups were asked to continuously improve their ability to judge and understand political issues and implement political requirements, so as to always remain in conformity with the CPC Central Committee with Comrade Xi Jinping at its core in terms of thinking, political orientation and actions.

The meeting also called on them to remain confident in advancing their work, in the meantime being vigilant and guarding against possible dangers. It added that they ought to prepare for the Party’s 20th National Congress with fine work and high morale.