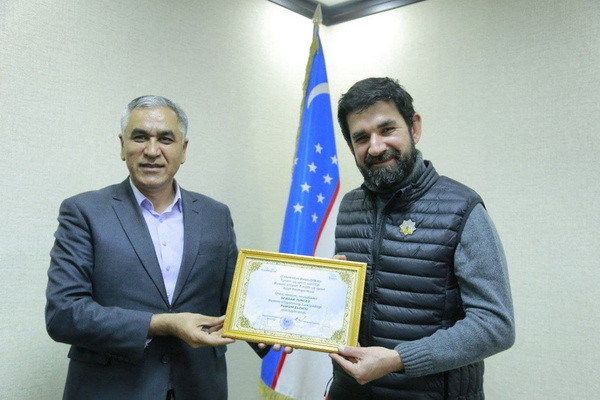 Tashkent, Uzbekistan (UzDaily.com) -- Filming is being carried out in Uzbekistan, led by the producer of the Turkish TV channel TRT, a well-known blogger on pilgrim tourism, Serdar Tuncer, for the program "along the Golden Chain" on the topic of pilgrim tourism in Uzbekistan.

The main goal of this given project is to promote on Turkish TV channels the tourist potential of the shrines of the "golden chain", their scientific heritage and a unique place in world civilization. In particular, they stressed the need to further expand cooperation in attracting pilgrims from foreign countries and developing this area.

The representatives of the Ministry of Tourism and Sports and the Department of Pilgrimage Tourism organized a meeting with the film crew. The parties discussed a number of projects, including strengthening the promotion of pilgrim tourism by inviting Turkish imams to Bukhara, as well as increasing the flow of tourists with the help of interesting videos about Surkhandarya, Kashkadarya regions, Samarkand and Tashkent.

“Our project started at the end of the year from the Yakub Charkhi sanctuary in Tajikistan and today we have visited many places of pilgrimage in your country. If we talk about Uzbekistan, the most beautiful places in the world are located here and there are all conditions and opportunities for travel. You can travel and rest all over the world, but all you have to do for your soul is to visit Bukhara,” said Serdar Tuncer.

Thanks to fruitful cooperation in the development of pilgrim tourism in Uzbekistan, Serdar Tuncer was appointed "Ambassador of Tourism" of the Bukhara region.

The program will be broadcast in 128 countries on the Turkish channel TRT during the month of Ramadan.