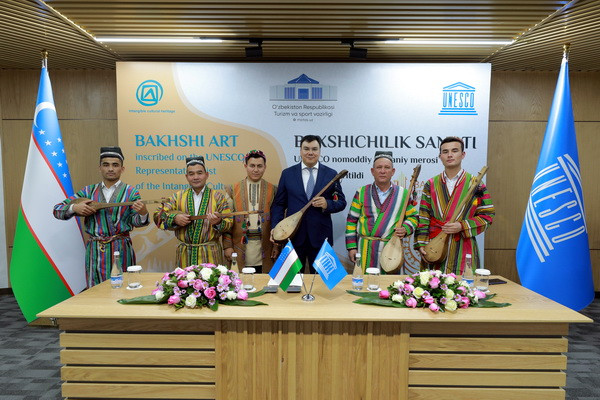 Tashkent, Uzbekistan (UzDaily.com) -- Within the framework of the 16th session of the Intergovernmental Committee for the Safeguarding of the Intangible Cultural Heritage of UNESCO (ICONSC), the Art of Bakhshi was included in the Representative List of the Intangible Cultural Heritage of Humanity as an element of the intangible cultural heritage of Uzbekistan. The session is being held in virtual mode from 13 to 18 December from the Organization’s headquarters in Paris.

The nomination package for this element was prepared at the initiative of the President of the Republic of Uzbekistan Shavkat Mirziyoyev by the National Commission for UNESCO and submitted to the ICONSC in 2020. For two years, the National Commission for UNESCO and the Permanent Delegation of Uzbekistan in Paris have been actively working to promote this element through work with the member countries of the Committee, the Evaluation Commission and the UNESCO Secretariat.

During the session, the delegation of Uzbekistan, headed by Deputy Prime Minister, Chairman of the National Commission of Uzbekistan for UNESCO Aziz Abdukhakimov, held a solemn presentation of the "Art of Bakhshi" nomination. The participants were informed about the efforts made by the Government to preserve and promote this art form at the national and international levels. Particular attention is paid to the concrete measures taken in recent years under the leadership of the President of Uzbekistan to revive the "Art of Bakhshi", including the organization of an international festival of the same name, which is held in Uzbekistan every two years.

In addition, the main results of the conference "The Role of Bakhshi Art in World Civilization" held in Termez in April 2019, efforts to support bakhshi, as well as academic programs in specialized colleges and universities to train young storytellers in order to transfer this art to future generations were touched upon.

A special video showing the history of the development of bakhshichilik on the territory of Uzbekistan is shown at the event.

ICONSC approved the inclusion of the element on the Representative List of the Intangible Cultural Heritage of Humanity by acclamation (broad consensus) without any debate or vote.

According to the representatives of the evaluation commission, this art is a unique historical and cultural heritage, and the nomination package fits all the criteria for including this national element on the Representative List of the Intangible Cultural Heritage. The adopted decision will contribute to the further strengthening of measures for the preservation, augmentation and promotion of the art of bakhshi at the national and international level with the close support of UNESCO.

"Art of Bakhshi" became the sixth element of the intangible cultural heritage included in the Representative List of the Republic of Uzbekistan. Previously, the list included the "Cultural Space of Boysun District" (2008), "Katta Ashula" (2009), "Askia" (2014), "Cultures and Traditions of Plov" (2016) and "Lazgi "(2019). In addition, with co-authorship with other countries, Uzbekistan took part in the nominations "Shashmakom" (2008), "Navruz" (2016) and "Art of Miniature" (2020).