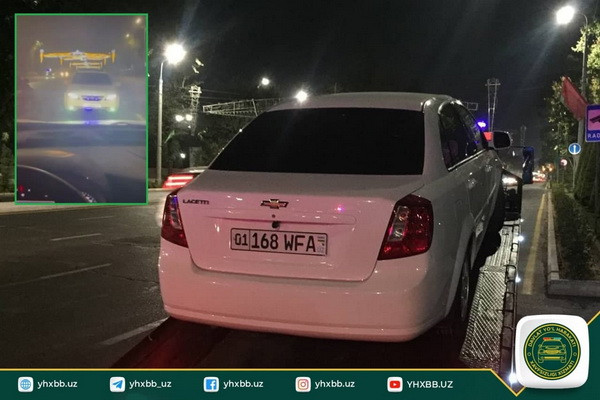 Tashkent, Uzbekistan (UzDaily.com) -- A video is being circulated on the Internet showing a car moving in reverse on the road and using special light and sound signals. On this fact, the traffic police reported the following.

On 4 September 2021 at about 22:50 o’clock on Navoi Street in Shaykhantakhur district, inspectors of the traffic police noticed this car on the road at the time of a traffic violation, after which the driver was given a signal to stop. Jaloliddin K., born in 1991, who was driving a Lacetti car (license plate 01 168 WFA), was not able to provide the traffic police inspector with documents giving him the right to drive a vehicle, and in the course of registering the fact of violations decided to hide on foot.

In addition to the lack of required documents, illegal installation of special light and sound signals, emergency traffic, it was found that the windows of the car were tinted without permission.

The traffic police inspectors drew up a protocol on the signs of offenses provided for in Articles 126, 128, note 5, 135 and 194 of the Code of the Republic of Uzbekistan on Administrative Responsibility. The car was parked in the impound.