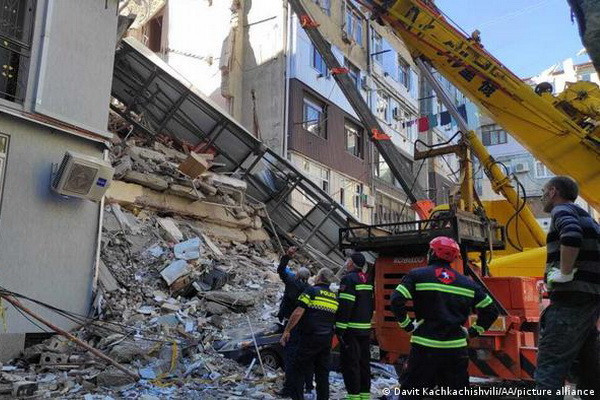 Day of mourning declared in Georgia after tragedy in Batumi

Day of mourning declared in Georgia after tragedy in Batumi

Tashkent, Uzbekistan (UzDaily.com) -- The death toll in the collapse of the entrance to a residential building in Batumi has increased to nine. Search work has been suspended, said Georgian Interior Minister Gomelauri.

After the collapse of a part of a residential building in Batumi, Prime Minister of Georgia Irakli Garibashvili declared 11 October as a day of mourning. “I express my deep sorrow over the tragedy in Batumi and offer my condolences to the family members and relatives of the victims. Together with them, the whole of Georgia mourns this terrible tragedy,” he said on Saturday.

Garibashvili promised that the state will provide all the necessary assistance to the victims of the collapse of the house. “All persons whose guilt is revealed will be punished to the fullest extent of the law. The Interior Ministry has already detained three people, and the investigation continues,” he said.

Meanwhile, the death toll in Batumi has risen to nine, Georgian Interior Minister Vakhtang Gomelauri said. According to him, the search and rescue operation, which involves about 300 people, has been suspended.

The causes of the tragedy are being investigated. According to one of the versions, the entrance collapse occurred in connection with violations during construction work on the first floor of the building, where cafes, shops and a beauty salon are located. In particular, the possibility of destabilization of a building after the dismantling of the load-bearing wall during the repair of commercial premises is considered. Another version is associated with a possible explosion of household gas.

The day before, in the center of Batumi, part of a five-story residential building on 26 May street, built in the 1980s, collapsed. Rescuers evacuated residents in the remaining part of the building. From under the rubble, they managed to save a teenager and a baby. There were 15 apartments in the collapsed building.