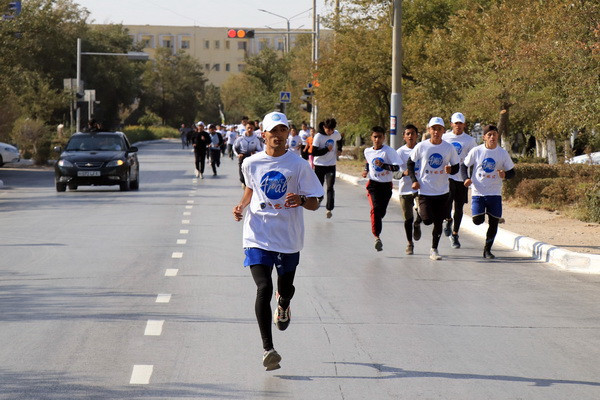 Save Aral: a race for the future

Save Aral: a race for the future

Tashkent, Uzbekistan (UzDaily.com) -- On 6 October, the city of Zarafshan hosted the second stage of the Save Aral - 2021 sports race, organized by the Athletics Federation, with the support of the Ministry of Tourism and Sports of the Republic of Uzbekistan, the National Olympic Committee, and the khokimiyat of Navoi region.

For the second year in a row, sports races "Save Aral - 2021" are held in the cities of Uzbekistan, which are held in order to support ideas to mitigate the consequences of the drying up of the Aral Sea and to popularize a healthy lifestyle not only for the residents of the Aral Sea region, but for the entire republic. The race is also aimed at attracting the younger generation to physical culture and sports, integrating people with disabilities into the sports community in the name of the future of the country, which had to face one of the largest environmental disasters in the world.

The international marathon "Save Aral - 2021" is a successor to the successfully held sports events "Aral Marathon", timed to coincide with the international high-level conference "Aral Sea Region - a zone of environmental innovations and technologies", held in 2019 at the initiative of the President of the Republic of Uzbekistan Shavkat Mirziyoyev.

The UN General Assembly resolution, adopted on May 18, 2021, declaring the Aral Sea region a zone of environmental innovations and technologies includes a set of regional events and initiatives aimed at improving the environmental, social, economic and demographic situation in the Aral Sea region. It is the sports movement that can become the impetus that will unite the residents of the country, the population of the Aral Sea region, including neighboring states, and the entire international community.

“The implementation of such social projects as Aral Marathon, Yangi Nafas, and Save Aral - 2021 are intended to draw the attention of civil society to a healthy lifestyle, an eco-friendly way of thinking and respect for the environment through one of the most accessible types of sports for the masses - athletics, - says the chairman of the Athletics Federation of the Republic of Uzbekistan Andrei Abduvaliev. “Within the framework of sports races, another practical task is also being carried out - it is carrying out a wide selection work among talented young people in large and small cities of the country to be attracted to the national athletics team of Uzbekistan.”

As part of the second stage "Save Aral - 2021", races will also be held in the cities of Zaamin, Nurafshan, Angren in October. The duration of the distance is 3 km. and based on the characteristics of the landscape, the organizers will build the route of the race through the sights of the city.

The end of the race "Save Aral - 2021" is planned to be held in November in Tashkent on the Day of adoption of the State Flag of the Republic of Uzbekistan.