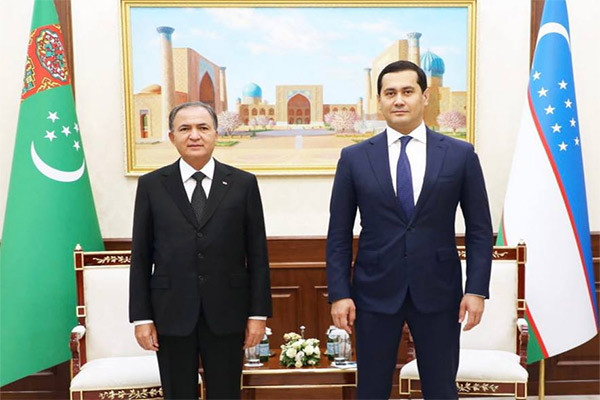 Tashkent, Uzbekistan (UzDaily.com) -- On 14 September, Tashkent hosted a meeting between Deputy Prime Minister - Minister of Investments and Foreign Trade of the Republic of Uzbekistan Sardor Umurzakov with Deputy Chairman of the Cabinet of Ministers of Turkmenistan Esenmurad Orazgeldyev.

During the meeting, the parties considered the preparation of the upcoming official visit of the President of Turkmenistan to the Republic of Uzbekistan and discussed the current state and prospects for expanding multifaceted cooperation between the two countries.

It was emphasized that over the past 4 years, the volume of the Uzbek-Turkmen trade has increased 3 times. Positive dynamics was achieved due to the growth of supplies of agricultural, fruit and vegetable, pharmaceutical and textile products, building materials, oil products, electricity and other goods.

At the same time, a significant untapped potential for cooperation in investment, trade, economic and industrial spheres was noted.

Mutual readiness was expressed to implement practical measures to increase joint investment projects, develop industrial cooperation and increase trade between the two countries. An agreement was reached on the establishment of active cooperation between the relevant ministries and departments of the two countries in order to develop proposals for the implementation of new investment projects and the conclusion of mutually beneficial trade contracts, which will fill the economic agenda of the upcoming visit at the highest level with practical content.

The prerequisites for the implementation of joint projects to organize the production of cars, agricultural and electrical appliances, finished textile and leather goods, construction materials, and deep processing of agricultural products in the territories of the two countries are outlined.

The urgency of joint work to enhance interaction between the business circles of the two countries was emphasized. An agreement was reached on organizing an Uzbek-Turkmen business forum on the eve of a high-level visit.

Following the meeting, the parties expressed their commitment to active work on the practical implementation of the agreements reached.