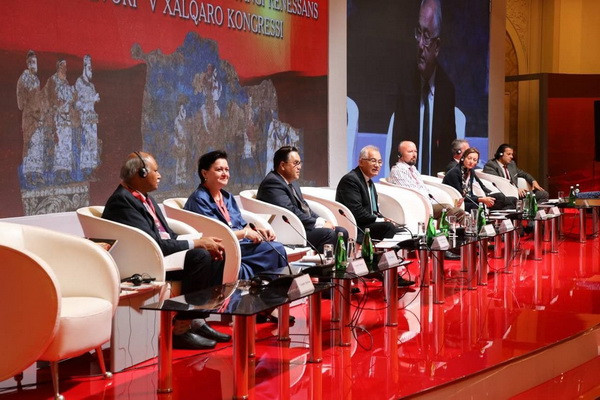 Scientists noted their adherence to the position of the Head of Uzbekistan, aimed at large-scale and cardinal reforms carried out in the country, including in the field of science and culture.

“The national idea aimed at creating conditions for the third Renaissance in Uzbekistan is based primarily on a well-considered cultural policy. It is culture that is the basis for the revival of the country, the rise of the spirituality of society, the upbringing of patriotism of the people, especially the younger generation. Thanks to systemic reforms in the field of national culture in Uzbekistan, a large-scale restoration and study of ancient monuments is taking place, scientific and educational work is receiving a new impetus, folk art is supported at the state level, the preservation of intangible heritage.

The country’s policy aimed at preserving this heritage is truly admirable. In recent years, it has undergone dramatic changes, which required a truly titanic effort on your part. Your personal attention and respect for the achievements of ancestors, the preservation and enhancement of their experience is an example for all of us,” the appeal says.

The scientists also spoke about the results of the Society’s work.

As noted by Irina Popova, director of the Institute of Oriental Manuscripts of the Russian Academy of Sciences (Russia), “The fact that the work of institutions of science and culture in the country is overshadowed by the care of the state and the political will of the President of the Republic of Uzbekistan Shavkat Mirziyoyev is of particular respect.”

“In recent years, our Society has implemented hundreds of publishing, research, media and scientific and educational projects, including a large-scale project to publish fifty illustrated book-albums of the Cultural Heritage of Uzbekistan series. Thanks to state support, these volumes are published in a circulation of ten thousand copies each and are distributed free of charge to scientific and educational institutions of Uzbekistan, including secondary schools. Work on this series, which tells about the cultural heritage of Uzbekistan in museums around the world, the release of documentary and feature films, the holding of scientific forums, the implementation of projects in other areas related to the study of heritage monuments, continues. We assure you that we are ready, as before, to make our contribution to the preservation of the cultural heritage of your country,” the appeal says.

“We, experts from different countries of the world - Europe, Asia and America, are ready to support your unique initiatives in this field in every possible way. Working in the field of studying the cultural heritage of Uzbekistan, each of us is convinced of the enduring value of the richest culture that has developed on the territory of Uzbekistan since ancient times, starting from the Bronze Age. The richest spiritual and material heritage of this country is of lasting value for the world civilization,” emphasized Frederic Baupertuis-Bressand, President and Co-founder of the Association for the Study of Art and History of the Temurids (France).

In conclusion, the participants of the Congress, members of the World Society expressed their readiness to fully support the initiatives and efforts of the President of Uzbekistan Shavkat Mirziyoyev to preserve the cultural heritage of Uzbekistan.

“What is happening now in New Uzbekistan deserves high respect. On behalf of the Sharjah Archaeological Authority, I would like to express my gratitude and appreciation to the President of Uzbekistan and the government for their efforts to strengthen cultural ties between peoples around the world, ”said Eiza Yusif, Director of the Sharjah Archaeological Council (UAE).

General Director of the State Hermitage Mikhail Piotrovsky sent a special appeal to the participants of the 5th Congress of the World Society. “Our museum and many institutions of Uzbekistan are linked by a long friendship and the most intensive cooperation in the field of culture and science, which continues in the current difficult years. We are very glad to all joint projects with colleagues from Uzbekistan and look forward to further expansion of cooperation, ”he said.