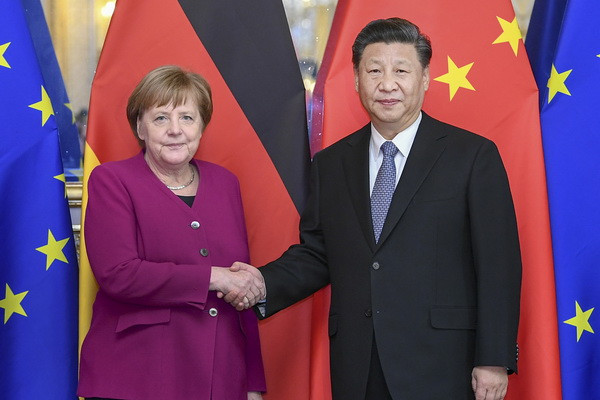 BEIJING, Sept. 10 (Xinhua) -- The China-Germany relationship will continue to make new progress, as long as both sides hold on to consolidating and deepening mutual trust, treating each other as equals and focusing on cooperation, Chinese President Xi Jinping said Friday in a phone conversation with German Chancellor Angela Merkel.

Xi noted that he and Merkel have maintained highly frequent and efficient exchanges since last year, which has played an important leading role in the development of China-Germany and China-European Union (EU) relations, and also demonstrated the high-level mutual trust between the two countries.

Xi said he highly appreciates the fact that Merkel has been actively committed to promoting Germany’s and the EU’s practical cooperation and friendly exchanges with China.

Over recent years, China-Germany relations have generally maintained smooth development, with cooperation in various fields showing strong resilience amid the COVID-19 pandemic, which has brought a genuine sense of fulfillment to the people in both countries, he said.

The two countries, he added, have helped China and the EU to complete their investment agreement negotiations on schedule, and worked together to uphold multilateralism, safeguard free trade, and actively tackle climate change, jointly making positive contributions to maintaining world peace and stability.

The fundamental reason for the great achievements of China-Germany relations, he said, lies in the fact that the two countries respect each other, seek common ground while reserving differences, focus on win-win cooperation and pursue complementation of their respective advantages.

Xi expressed his hope that Germany will encourage the EU to adhere to the right policy on China, treat differences objectively and address them rationally, so as to promote the sustained and sound development of China-EU relations.

For her part, Merkel said that over recent years there are many aspects in the development of Germany-China and EU-China relations that are worth summing up.

She said she is willing to maintain close communication with the Chinese side and make joint efforts to push Germany and China as well as the EU and China to bridge gaps through dialogue and properly handle their differences.

The EU-China investment agreement is beneficial for both sides, she said, adding that she hopes it can be smoothly ratified and put into effect as soon as possible.

Germany hopes to strengthen vaccine cooperation with China, she added.

Merkel shared her view on the current situation in Afghanistan, and expressed her hope to work with China to strengthen communication and coordination within the United Nations and other multilateral frameworks.

Xi stressed that China advocates coexistence and mutual learning among different civilizations, opposes interference in other countries’ internal affairs, and stands ready to make constructive efforts with the international community, including Germany, to truly realize peace and stability in Afghanistan.