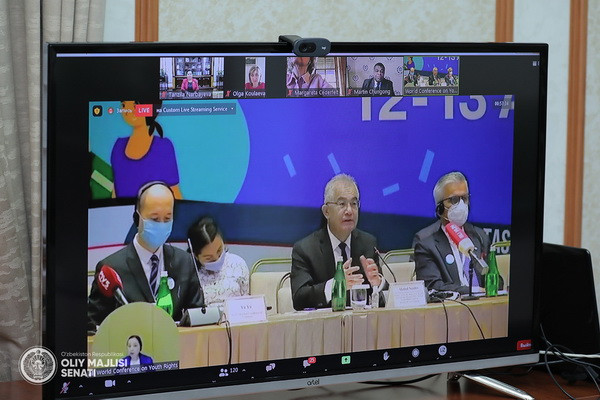 The event is organized on the basis of an initiative put forward by the President of the Republic of Uzbekistan Shavkat Mirziyoyev in a speech at the 46th session of the UN Human Rights Council, with the support of the international community. Representatives of more than 30 foreign countries take part in it.

At the conference, the Chairman of the Senate of the Oliy Majlis of the Republic of Uzbekistan Tanzila Narbaeva made a welcoming speech.

It was noted that the youth issue in our country is defined as one of the priority directions of state policy. Over the past 5 years, more than 50 laws and other normative legal acts have been adopted to protect the rights and interests of young people. The first among them was the Law on State Youth Policy.

In addition, in the Action Strategy for the five priority areas of development of Uzbekistan, the issue of youth is given special attention.

At present, youth parliaments have been created in the chambers of the Oliy Majlis. More than 260 young deputies carry out their activities in local Kengashes of people’s deputies.

A new system has been created in the republic to involve young people in education, culture, art, sports, reading books and computer technology, ensuring their employment and supporting entrepreneurship.

In addition, the head of state paid special attention to the issue of youth at the third consultative meeting of the leaders of the Central Asian countries in Turkmenistan and it was proposed to hold a Central Asian Youth Forum in Uzbekistan next year.

The opening of the event was addressed by the UN High Commissioner for Human Rights M. Bachelet, Secretary General of the Inter-Parliamentary Union M. Chungong and heads of other international organizations.

As part of the two-day conference, three plenary sessions and parallel sessions will be held, during which issues such as the participation of youth in the development of their country in the context of the impact of the COVID-19 pandemic on vulnerable youth groups will be comprehensively considered, measures to stimulate youth opportunities to receive quality education, and employment in production, participation of boys and girls in decision-making that affect their lifestyle.

Participants will also discuss prospects for improving existing international mechanisms for the protection and support of youth rights.

Upon completion of the event, it is planned to adopt a Declaration on the involvement of youth in global action.