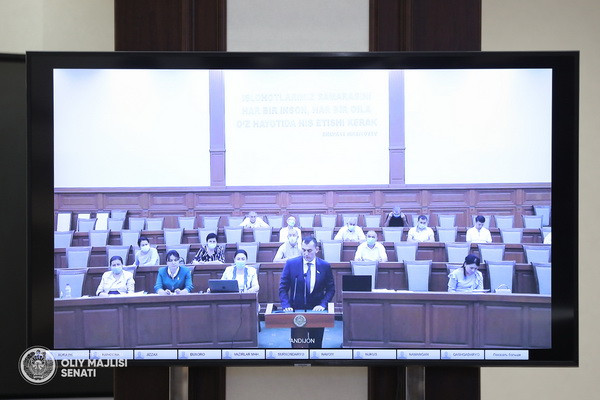 It was noted that during the reporting period, the Committee carried out systematic work to develop inter-parliamentary relations, ensure the foreign policy and foreign economic interests of Uzbekistan, strengthen the international image and authority of the country.

It was emphasized that despite the global COVID-19 pandemic, there was an increase in the inter-parliamentary cooperation of the Senate during the reporting period. The number of friendship groups for cooperation on gender issues, interregional cooperation, promoting the ideas of enlightened Islam and strengthening partnerships in the field of pilgrimage and youth tourism with foreign parliaments has almost doubled, reaching 49.

As part of the implementation of new priority tasks, as well as taking into account the increased role of parliament, the Senate Committee focused on such topical issues of economic diplomacy as stimulating foreign economic relations, creating the necessary conditions for attracting foreign investment and promoting tourism.

So, during the reporting period, the Committee, with the participation of deputies of local Kengashes of people’s deputies and with the involvement of experts in the field of legislative activity, considered and submitted 7 laws for approval by the Senate.

20 control and analytical events were held, including 10 hearings of information from ministries and departments, 4 reports of the heads of diplomatic missions of the Republic of Uzbekistan in foreign countries (in total, 23 Ambassadors’ reports were heard), the state of implementation and adoption of by-laws under 4 laws was studied.

It was noted that the Committee hears the reports of the heads of the diplomatic missions of Uzbekistan with special emphasis on the effectiveness of their work in the trade and economic sphere. This is for the Committee a new implemented mechanisms of parliamentary control, as well as the introduction into practice from 2021 of control over the implementation of the "Road Maps" signed as a result of high-level visits. As part of this activity, field studies are carried out on the actual state of the implementation of investment projects and the execution of concluded export contracts, in which deputies of local Kengashes in the regions of the republic are actively involved.

On the basis of citizens’ appeals and consultations with leading experts, 3 parliamentary inquiries were prepared to the Cabinet of Ministers on the most pressing and systemic problems.

In addition, the Committee has radically revised the mechanisms for working with citizens’ appeals. Interaction with deputies of local Kengashes of people’s deputies has been strengthened to consider and resolve complaints from citizens. Based on the appeals, it was introduced into practice the direction of parliamentary inquiries on systemic problems and shortcomings of concern to the population.

At the same time, during the discussion of the report with leading experts, deputies of local Kengashes of people’s deputies, new areas of work were identified, the potential of which was not fully utilized by the Committee. Thus, the need was noted for the provision of methodological assistance by local Kengashes of people’s deputies to facilitate the organization of hearing information from deputy khokims about the work done in attracting foreign investment and promoting exports. In addition, it is advisable to step up work to support the development of interregional ties with foreign countries and expand inter-parliamentary cooperation to create additional guarantees and opportunities for domestic labor migrants in foreign countries.