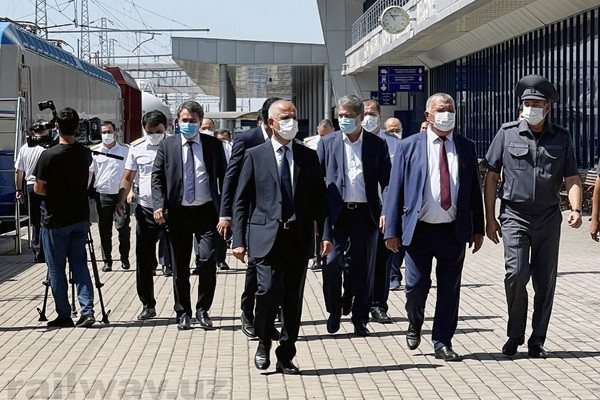 Tashkent, Uzbekistan (UzDaily.com) -- A solemn presentation ceremony of the new high-speed train Afrosiyob delivered to Uzbekistan was held today in Tashkent. The solemn ceremony was attended by acting Chairman of the Board of Uzbekiston Temir Yollari Khusnutdin Khasilov, as well as director of the branch in Tashkent of the Spanish company "Patentes Talgo S.L.U." Javier Romero Caballero.

“As you know, the first two Afrosiyob trains were delivered to our country 10 years ago, in 2011, and the next two rolling stock in 2017,” said Khasilov. - The acquisition of these electric trains undoubtedly improved the quality of passenger traffic on the railways of Uzbekistan, brought the transport and communication systems of the country to the level of modern international standards.

In June 2019, Uzbekiston Temir Yollari JSC a contract with the Spanish company Patentes Talgo S.L.U. for the purchase of two more high-speed electric trains of the Talgo-250 series. The contract value was 57.5 million euros. According to the investment project, in addition to the two trains, the Spanish company will supply four spare economy-class cars, as well as equipment for the maintenance of the trains. The contract is financed by a loan from the Fund for Corporate Internationalization of Spanish Companies (FIEM).

“First of all, I would like to express my deep respect to the railway administration of Uzbekistan,” says the director of the branch in Tashkent of Patentes Talgo S.L.U. Javier Romero Caballero. - Our cooperation has been going on for 10 years and we are glad to develop this joint project and share your joy and this victory together with you.

Note that at the beginning of July, the new train, first passing 4000 km by water from the Spanish city of Bilbao, arrived in the Russian northern capital - St. Petersburg. From there, on 20 July, by rail, having overcome another 4200 km through the territory of the Russian Federation and Kazakhstan, the high-speed train was delivered to Tashkent on the evening of 24 July. This is the fifth passenger train purchased as part of the investment project. In September-October this year, delivery of one more - the sixth high-speed train is expected.

Currently, Uzbekistan already has four units of this modification, which run to Samarkand, Jizzak, Navoi, Bukhara and Karshi. In the coming years, after the completion of electrification on the new section of the Bukhara-Khiva railway, the high-speed train route will continue to Khorezm. Let us recall that 10 years ago, at the end of 2011, the first high-speed train "Afrosiyоb" began to run between the capital of Uzbekistan and Samarkand. The train includes VIP, Business and Economy class carriages, as well as a Bistro carriage. On the way, the train develops a speed of up to 230 km / h (maximum speed according to the technical characteristics of 250 km / h), covering the distance from Tashkent to Samarkand in 2 hours 08 minutes, to Bukhara - 3 hours 51 minutes and to Karshi - 3 hours 21 minutes ...

The new trains do not differ significantly from their predecessors operating in Uzbekistan. Each of the 2 head locomotives and 11 carriages, including 1 - Bistro, 2 - VIP-class, 2 - Business-class and 6 - Economy-class. There are 286 seats. Note that the train arrived accompanied by 25 specialists from the Spanish company Patentes Talgo S.L.U., who will carry out commissioning and test tests of the new train within a month.

In addition, the existing 2 Afrosiyob trains with 218 seats will be supplemented by the arrived spare economy class cars. Each of these trains will be increased by two cars (each with 36 seats). Thus, passenger seats will increase from 218 to 286. For reference, Uzbekistan is currently in the list of 20 countries with a developed high-speed railway infrastructure and has become the only country in Central Asia to be included in the Global High-Speed Train Ranking.