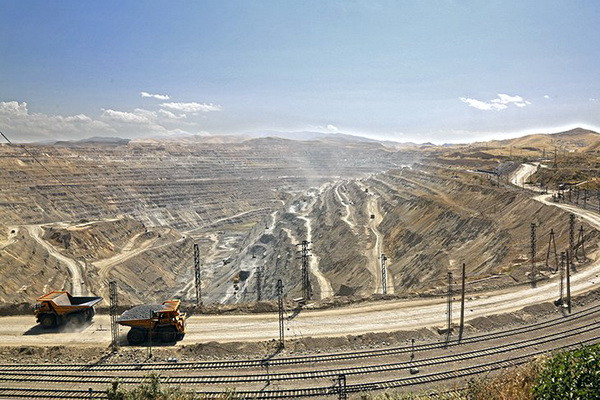 Tashkent, Uzbekistan (UzDaily.com) -- Today, the President of Uzbekistan is visiting the Almalyk Mining and Metallurgical Combine (AGMK) to get acquainted with the work on expanding the production of non-ferrous and precious metals based on the AGMK deposits.

AGMK is implementing a large project to develop the Yoshlik I field. The head of state will lay the first stone in the construction of the third copper-processing plant (MOF) within the framework of this project. This month, the Russian company UZTM-KARTEX (St. Petersburg) filled the first parts of the crushing complex, which Uralmashplant will supply to Uzbekistan for the construction of the MPF.

In November 2020, AGMK announced that it is aimed at attracting funds from IFIs to finance projects on the Yoshlik I field. In September 2020, the head of the Russian state corporation VEB.RF Igor Shuvalov, accompanied by the Prime Minister of Uzbekistan, got acquainted with the project for the construction of a new MPF at the AGMK.

Sidikov Bakhodirjon (former chairman of Uzbekneftegaz) is the head of the group for the implementation of the investment project "Development of the Yoshlik I" field.

According to the resolution of the President of the Republic of Uzbekistan "On measures to expand the production capacity of JSC Almalyk GMK based on the Dalneye deposit" (as amended on August 15, 2017. No. PP-3211), the sources of financing for the implementation of the Yoshlik I deposit development investment project were determined:

- own funds of AGMK in the amount equivalent to US$115.0 million;

- loans from Ipotekabank and Asakabank in the amount equivalent to US$195.0 million and US$93.7 million, respectively, provided for a period of 15 years, including a grace period of 6 years, at an interest rate not exceeding the Central Bank’s refinancing rate, with interest capitalization during the grace period.