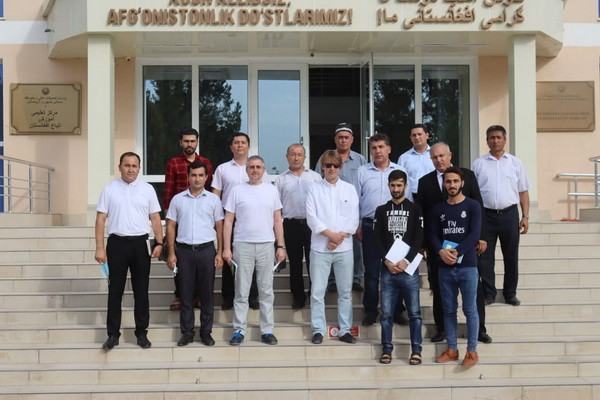 Tashkent, Uzbekistan (UzDaily.com) – On 17-18 July 2021, leading Russian experts - Director of the Center for Eurasian Studies of MGIMO under the Ministry of Foreign Affairs of Russia I. Safranchuk and Program Director of the Valdai Club T. Bordachev during their stay in Uzbekistan to participate in the international conference “Central and South Asia: Regional Interconnectedness. Challenges and Opportunities”, made a working visit to Termez.

The trip was organized by the Institute for Strategic and Interregional Studies under the President of the Republic of Uzbekistan in order to familiarize the Russian side with the large-scale work on the creation and development of modern infrastructure in Surkhandarya region aimed at expanding and deepening mutually beneficial cooperation with Afghanistan.

In particular, an on-site presentation of the activities and potential of the Educational Center for Training Afghan Citizens in Termez, created at the initiative of President Shavkat Mirziyoyev in 2018, was organized for Russian specialists.

Here, Afghan youth have the opportunity to study in 19 areas of higher and 20 - secondary specialized, vocational education.

Since September 2019, 172 students are studying at the Educational Center in the areas of "Uzbek Language and Literature", "Obstetrics and Nursing", "Ground Transport Systems and Their Operation", of which 46 are girls.

To date, 136 Afghan students have already completed their studies at the center, 96 of them received bachelor’s degrees in the direction of "Uzbek language and literature", 40 took short-term courses in the Russian language, and also learned the skills of agriculture and entrepreneurship. Today, some of them work in the parliament, ministries and departments of the country, teach at IRA universities, and run independent businesses.

The guests got acquainted with the work of the international checkpoint "Termez - Hairaton", where new modern terminals were built to increase the throughput and quality service of persons crossing the border, new advanced border crossing control technologies were introduced, which significantly increased the capacity of border and law enforcement services to identify illegal facts at the border.

The experts also visited the international cargo center, which works for the export and import of agricultural products. The service operates around the clock. There is an open area of 50 hectares and a hangar of 6000 sq. M. for storage and transshipment of goods, receiving more than 400 freight vehicles.

Russian specialists have been presented a project for the construction of a free trade zone on the border with Afghanistan on an area of 26 hectares.

In addition, the guests visited the objects of cultural and historical heritage - archaeological and local history museums, the Termez-ot mausoleum, got acquainted with the landscaping works in the city of Termez.

The trip of Russian guests to Termez was widely covered in Russian analytical publications. In particular, as the magazine "Russia in Global Affairs" notes, "stability is maintained on the Uzbek-Afghan border, everything is calm, there are cargoes, a decent cargo center is operating, which contributes to the development of trade between the countries of Central and South Asia."

Uzbekistan and Russia share a common vision and similar approaches to the problems of regional security in Central Asia. Moscow supports Uzbekistan’s initiatives to stabilize the situation in Afghanistan. The sides advocate a peaceful settlement of the conflict through negotiations and the revival of the peaceful economy of the Islamic Republic of Afghanistan.