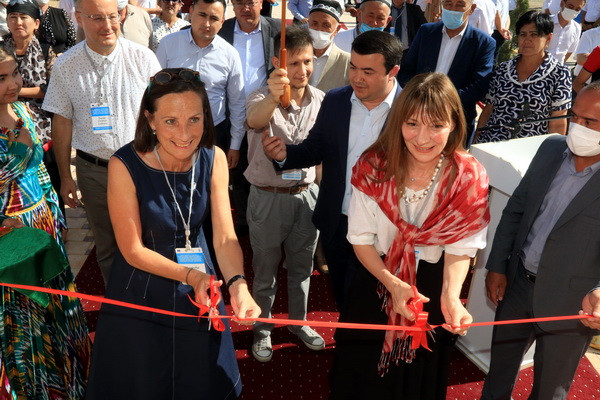 Tashkent, Uzbekistan (UzDaily.com) -- Today, on 10 June, in Dehkanabad district of Kashkadarya region, which is one of the remote regions of the country, a solemn ceremony was held to open a new modern Center for Public Services (CSU). This center was built at the expense of the Public Services Agency and equipped with the assistance of UNDP and the European Union.

The new Center for Public Services is equipped with modern IT and communication equipment (servers, PCs, network and telecommunication devices, video surveillance devices, devices for user feedback, etc.), there is a comfortable waiting area for citizens and a modern air conditioning system.

During the construction of the building, special attention was paid to its compliance with modern urban planning standards and the creation of the most comfortable conditions for citizens, especially people with disabilities. The new Center has an electronic queue system, an information kiosk, an area for self-service electronic services, a children’s playground, a buffet, a mini-library and free Wi-Fi. There are also information stands and posters to raise awareness among visitors about the various opportunities for self-service government services.

Most of the public services here, as, indeed, in other similar centers, can be obtained on an extraterritorial basis, that is, regardless of place of residence and stay.

The new Central State University in Dehkanabad provides about 157 public services and is capable of serving up to 100 people a day. In addition, the building houses the People’s Reception of the President and the Reception of the Prime Minister for consideration of applications from entrepreneurs.

In the near future, with the support of a joint project, the Center for Women’s Support will also start operating in the Center, where women will be able to receive free consultations and assistance on starting and running a business, legal issues, psychological support and other social aspects.

The center is aimed at all segments of the population, including women with small children, people with disabilities of various groups, youth and elderly people. In Dehkanabad region with a population of more than 149 thousand people, about 3% of the population are people with disabilities. Of these, more than 400 people move with the help of wheelchairs and 66 people are blind. To improve access to public services, the Public Services Agency, with the assistance of the Joint Project, is equipping all new pilot Public Service Centers, including the new Central State University in Dehkanabad region, with ramps, handrails, as well as wheelchairs and other necessary conditions for people with disabilities.

In addition, within the framework of the Joint Project, it is planned to assist in the introduction of Braille for the convenience of obtaining public services, conduct trainings for operators of Centers for Service for Persons with Disabilities and develop a special tab for people with special needs on the portal of public services.

CSU in Dehkanabad is the first center where a volunteering program will be implemented, which is aimed at involving volunteers in the work of the Agency and Public Service Centers to provide public services to vulnerable groups - people with disabilities, the elderly and women with small children. All volunteers underwent trainings to prepare them for interaction with the population in the provision of public services in remote areas. Each volunteer will be equipped with the technical means necessary to carry out their duties.