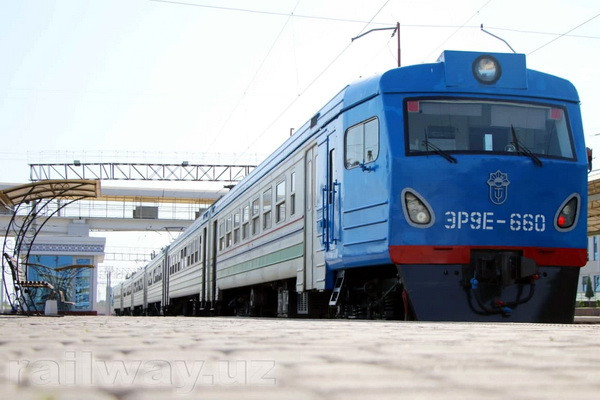 Currently, a detailed study of the technical characteristics and pricing policy of rolling stocks manufactured in China, South Korea, Belarus and the Russian Federation is being carried out. In the near future, it is planned to purchase new electric trains for suburban traffic.

It should be noted that among the consistently implemented complexes of measures aimed at further developing the tourist potential and creating favorable conditions for the travel of local and foreign tourists, an important role is played by the organization and provision of transport interconnection of tourist routes in the unique natural zones of Tashkent region. So, for example, from year to year the demand for the direction from Tashkent to Khodjikent, located in Bostanlyk district, is growing. As you know, this is due to the fact that in Bostanlyk district there are dacha villages, countless recreation areas and sanatoriums. In this direction, the daily passenger traffic is about 2,000 people. Passengers note the convenience of electric trains in this direction on weekends.

Residents and guests of the capital prefer to spend their holidays in those parts and for this more and more conditions are being created there. And of course, the largest flow of tourists falls on the summer season and it is no secret that in this regard, many kilometers of traffic jams are created on highways in that direction, in which you have to waste time. Under these circumstances, the electric train is superior over the road transport both in pricing policy and in reducing travel time. Considering the above factors, Uzbekiston Temir Yollari plans to launch 4 additional new high-speed electric trains on this section. This will significantly reduce the travel time from Tashkent to Khojikent from the current 2 hours 15 minutes to 1 hour, reduce traffic jams on highways, increase daily passenger traffic from 2,000 to 12,000 people, and, importantly, integrate rail passenger transportation into urban transport systems. agglomerations.

To organize the movement of suburban railway transport, corresponding to the speed of development of this direction, the existing railway sections are also being modernized, the railway track is being repaired in the direction of Tashkent - Khojikent. in addition, the existing rolling stock is undergoing modernization. So, for example, the current electric train running between Tashkent and Bekabad transports passengers in comfortable and comfortable trains with soft seats, the size of specially designated places for storing things (luggage) has been increased in carriages, and much more.

Electric trains of direct current of the ER9E and ER2M series are operated in suburban traffic. Suburban electric trains are formed from motor, head and trailer cars. The motor cars are equipped with four traction motors, a traction step-down transformer and the equipment necessary for their operation. Trailer cars are adapted to work with motor cars and have auxiliary equipment, while the head cars are equipped with control cabins. All electric trains run in suburban traffic at a distance of up to 150 km.