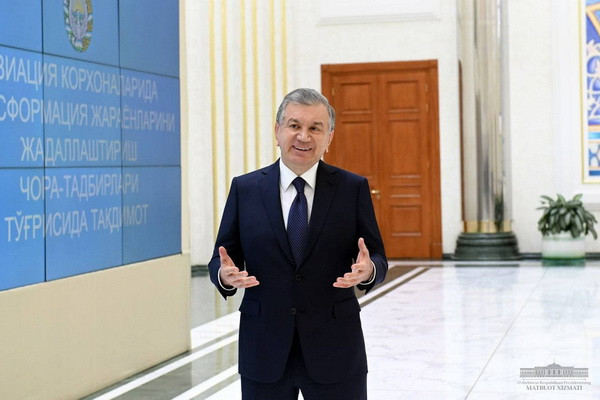 Transformation of the enterprise of the aviation industry considered

Transformation of the enterprise of the aviation industry considered

Tashkent, Uzbekistan (UzDaily.com) -- On 19 April, President of Uzbekistan Shavkat Mirziyoyev got acquainted with a presentation of measures for Uzbekistan Airways and Uzbekistan Airports joint-stock companies’ transformation.

As is known, by the decree of the President from 27 November 2018, two joint-stock companies, Uzbekistan Airways and Uzbekistan Airports, were created at Uzbekistan Airways. In the process of structural transformations being carried out today in the domestic economy, the transformation of these companies is also planned. The difficult economic situation caused by the coronavirus pandemic also requires improving the aviation industry.

The main focus in the transformation of domestic airlines is to increase efficiency. For example, it is expected to reduce the costs of Uzbekistan Airways by US$46.5 million. For this, it is planned to optimize the staff of the company and its structural organizations, decommissioning 12 unused aircraft, and reducing the commission of foreign agents for the sale of air tickets.

The goal was set to increase revenues by $40 million per year. For this, it is planned to introduce charter flights to popular destinations and cargo transportation on new routes, the possibility of online check-in and seat selection on all domestic flights.

Following the new business strategy, it is planned to switch to a hybrid service model, according to which part of the flights will be carried out on the principle of full service, and some on the principle of a low-cost airline. Business-class will be canceled on destinations that are not in high demand, with an increase in seats in a lower class.

Starting the third quarter of this year, it is planned to establish low-cost flights on 4 Airbus A-320 aircraft. It is planned to lease 3 Airbus А321 NEO LR airliners for the development of long-haul routes, to increase the number of domestic flights from the current 17 to 49 per week.

It is planned to digitize the industry to improve the convenience of passengers, including the introduction of the Aerolabs online service system and a CRM complex for managing customer relations.

President Shavkat Mirziyoyev noted the importance of increasing the mobility of the population by increasing the availability and quality of services.

Measures have been developed to improve the efficiency of Uzbekistan Airports Joint Stock Company. Today the company includes 11 airports, each of which operates independently.

According to the presentation, these airports are proposed to be united under the management of a single governing body. To increase the financial stability, based on international experience, it is planned to reduce costs from 32 to 15 percent, optimize purchases, reduce airport tax by 27 percent, including up to 50 percent within the framework of pilgrimage tourism.

The main attention was paid to the issue of increasing income. In particular, it is planned to increase revenue from trade and services by building a cargo terminal at Tashkent International Airport, increasing transit between Europe and East Asia, and expanding the area of the airport terminal.

The Head of the state gave instructions on the development of airport infrastructure, increasing the volume of passenger and freight traffic, organizing catering and other services at regional airports.