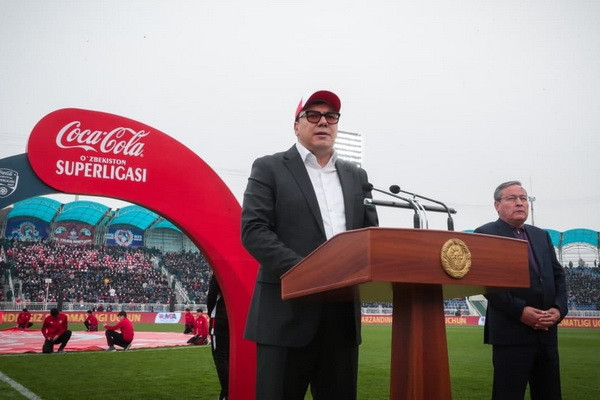 In accordance with the Edict of the President of the Republic of Uzbekistan “On measures for the widespread implementation of a healthy lifestyle and further development of mass sports”, the stadium was renamed “Bobur Arena” in honor of Zahiriddin Muhammad Babur.

Deputy Prime Minister of the Republic of Uzbekistan Aziz Abdukhakimov and Hokim of Andijan region Shuhratbek Abdurahmonov congratulated the people of the region on the construction of such a beautiful complex.

On behalf of the President of Uzbekistan, the edict was adopted on the development of mass sports, as well as the transfer of stadiums to a new concept - the “Arena Concept”. To date, the first steps in this direction have been taken.

Previously, the stadium operated for only 1 month of 12 months, namely about 20-25 days, during which time only 10 competitions were held. The other time was idle. It should be noted that the arena used to operate 20-25 days a year due to cultural, public and entertainment events but now this figure will increase to 100-120 times.

“We will continue this project for another year and turn it into a modern sports and entertainment center” said Aziz Abdukhakimov.

According to the edict of the head of state, a small entertainment area has been built around the arena, which will serve as a recreation area for visitors to the stadium. The stadium was given to an entrepreneur on the basis of a public-private partnership, and to date the entrepreneur has spent about 6 billion sums at his own expense.

At the same time, the entrepreneur has also borne the costs of the community, as he has also set up a commercial activity here, thus saving 20 billion in his budget. It was noted that systematic work is underway to turn stadiums in other regions of Uzbekistan into arenas.

“When I went to Spain for a meeting of the World Tourism Organization, I met with the leadership of “Atlético Madrid” and studied the experience of these arenas and today in Uzbekistan the first practical steps in this direction are being taken. Many shops are being set up around the arena, selling sportswear and accessories. Dining areas are being set up. A study of Atlético Madrid’s experience revealed that they not only host sporting events at the stadium but also earn 30% from additional services and advertising by hosting other events.

“Several LED screens will be installed around the “Bobur Arena” and the owners of the arena will also be able to earn money by selling advertising. In addition, the arena will be constantly running due to the concert programs of famous singers, major MMA fights. As the number of events increases, of course, the number of visitors will increase, which will lead to an increase in the number of advertisers. This will also bring additional income” said Aziz Abdukhakimov.

As a conclude, the expansion of the “Bobur Arena” in Andijan will lead to the creation of many new jobs in the region, as well as the development of tourism and sports.