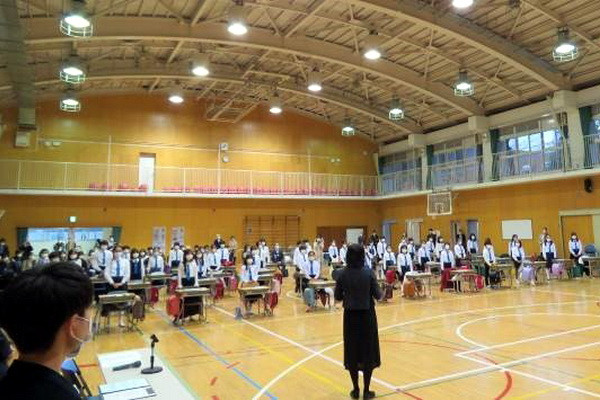 Tashkent, Uzbekistan (UzDaily.com) -- On 13 March 2021, the Embassy of Uzbekistan in Japan, together with the mayor’s office of the Suginami district of Tokyo and the Takaido secondary school, organized a presentation of the new Uzbekistan and its history, culture, art and tourism potential.

Suginami is one of the special areas of Tokyo in the western part of the city. In 2019. Suginami was appointed as the venue for training camps for Uzbek boxers in preparation for the Tokyo Olympics.

Takaido High School is one of the oldest schools in Tokyo, founded in 1900. Her connection with Uzbekistan is due to the fact that her students learned and at several major events in Tokyo sang the national anthem of Uzbekistan in Uzbek.

The event, held on 13 March, was attended by representatives of the Suginami City Hall, cultural, educational circles and the media (more than 120 people in total).

At the opening ceremony, it was emphasized that thanks to the upcoming Olympic Games in Tokyo, the residents of Suginami and the entire staff of Takaido High School have become closely acquainted with Uzbekistan.

The participants got acquainted with the rich history, distinctive culture and unique tourist attractions of Uzbekistan. It was especially noted about the new stage of development and achievements of Uzbekistan over the past 4.5 years, about the upcoming celebration on September 1 of this year. 30th anniversary of the independence of the republic.

It was emphasized about the centuries-old history of Uzbek-Japanese relations, which have developed since the time of the Great Silk Road and keep the facts of cultural exchanges between the two peoples. The participants of the event were shown the video film "I love Uzbekistan", which tells about the unique nature of the republic, the rich cultural traditions of the Uzbek people and the historical cities of the country.

During the presentation, the choir of 50 students of the Takaido school sang the National Anthem of Uzbekistan in Uzbek with great warmth. The Japanese side expressed hope that the sports team of Uzbekistan will successfully perform at the Tokyo Olympics and that the anthem of the republic will be performed many times as a result of the competition.

As part of the event, the film crew "J: COM TV" filmed videos about the presentation of the tourism, cultural and humanitarian potential of Uzbekistan for subsequent broadcast to Japanese television viewers. For representatives of print media, Suginami presented a variety of materials about cultural and historical sights, national cuisine, the main directions of Uzbek-Japanese cooperation, as well as the participation of the sports team of Uzbekistan in the Tokyo Olympic Games.

In conclusion, the participants of the event - the entire team of the Japanese school and the choir members from among the students, as well as invited parents and other guests - were offered dishes of Uzbek national cuisine, including pilaf.