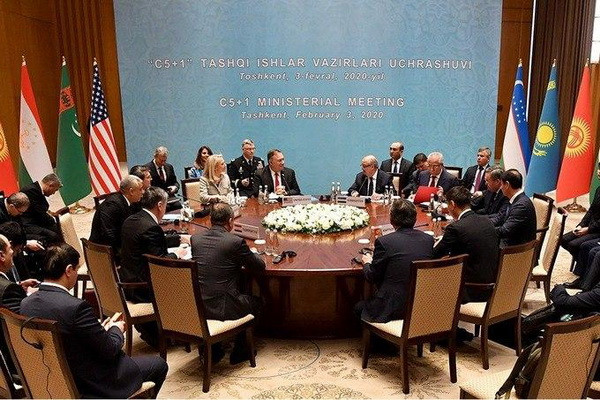 Joint statement of the ministerial meeting of the “C5 + 1” format

Joint statement of the ministerial meeting of the “C5 + 1” format

Tashkent, Uzbekistan (UzDaily.com) - The Secretary of State of the United States of America and the Ministers of Foreign Affairs of the Republic of Kazakhstan, the Kyrgyz Republic, the Republic of Tajikistan, Turkmenistan, and the Republic of Uzbekistan adopted this joint statement following the results of the ministerial meeting in the “C5 + 1” format held in Tashkent on 3 February 2020.

The modern development of regional processes confirms the importance and relevance of the “C5 + 1” format, which helps to maintain a trusting dialogue and practical interaction between its participants in ensuring sustainable peace, stability and prosperity in Central Asia.

The United States reaffirms its continued support for the sovereignty, independence and territorial integrity of the countries of the region, as well as its firm commitment to expand multifaceted regional cooperation in all areas of mutual interest.

In order to effectively use the potential of the Central Asian region, participants intend to make efforts to develop partnerships in the following priority areas:

- strengthening mutual trust, interaction and constructive cooperation in the further development of Central Asia as a strong, united, independent and prosperous region;

- encouraging coordinated regional projects aimed at promoting trade, transport, logistics and infrastructure ties, promoting entrepreneurship, as well as expanding business and investment contacts between business circles of the states of the region and the USA, including within the framework of the Framework Agreement on Trade and Investments ( TIFA);

- development and intensification of interaction between the countries of the region in the energy field, including the sphere of renewable energy sources, and in support of national plans for adaptation to climate change;

- preparation of proposals and initiatives aimed at improving the scientific, technological, social and innovative development of the region, as well as strengthening its tourism potential;

- development of cooperation in ensuring border security, intensification of joint efforts of the border services of the countries of the region in combating cross-border threats such as the proliferation of WMD, terrorism, illegal migration, human trafficking and drug trafficking, including using the potential of CARICC;

- support for mutually beneficial cooperation in promoting the peace process and political settlement of the situation in Afghanistan, as well as strengthening trade, economic, transport and infrastructure ties between the states of the region and Afghanistan;

- strengthening civil society, including through the protection of human rights and compliance with international law.

The Secretary of State and Ministers expressed gratitude to the Republic of Uzbekistan for holding the next meeting of the heads of foreign affairs agencies in the “C5 + 1” format.