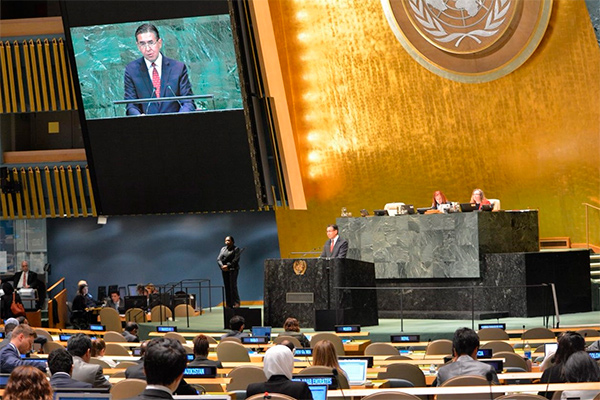 Tashkent, Uzbekistan (UzDaily.com) -- On 19 December 2019, the UN General Assembly at its plenary session adopted a special resolution “Sustainable Tourism and Sustainable Development in Central Asia”. The draft document developed by Uzbekistan and introduced on behalf of all five Central Asian countries was unanimously supported by all UN member states.

The initiative for the adoption by the UN General Assembly of this resolution was first put forward by the President of Uzbekistan Shavkat Mirziyoyev in April 2019 in Beijing at a meeting with UN Secretary General Antoniu Guterres as part of the international forum “One Belt, One Road”.

In order to implement this initiative in practice, the Uzbek side, together with the UN Secretariat and the World Tourism Organization (UNWTO), carried out targeted work, starting from the preparation of the text of the draft document and to its final approval with other states.

On 14 November, the Second UN Committee, which considers economic growth and sustainable development, adopted a draft resolution by consensus and recommended submitting it to the General Assembly.

Over 50 countries of North and Latin America, Asia, Africa and other continents acted as co-authors of the document, which testifies to the wide recognition by the international community of the relevance and timeliness of the initiative of the leader of Uzbekistan. Among the co-authors are countries such as Brazil, Vietnam, Indonesia, India, Ireland, Israel, China, Canada, Norway, Morocco, the Republic of Korea, Russia, Singapore, Senegal, Turkey and others.

According to the UNWTO, the tourism sector accounts for about 7% of world exports, one of eleven jobs and 10% of world GDP. Tourism is integrated in 400 industries, annually provides more than US$1.5 trillion in revenue and is actually the only industry in the world that has shown steady growth in recent years.

The resolution adopted by the General Assembly emphasizes the importance of the efforts of Central Asian countries to implement the 2030 Agenda for Sustainable Development, various international events for the further development of tourism in the region, as well as measures taken by the Central Asian states to widely attract international finance and tourism to the tourism sector. investment.

According to the document, the passage of the Great Silk Road through Central Asia and efforts to promote tourism in world markets contribute to the growth of interest of foreign tourists in the region.

In addition, in the resolution, UN member states welcome the significant practical contribution of Central Asian countries to strengthening regional stability and sustainable development, and also express their full support for efforts and initiatives aimed at strengthening economic cooperation in the region.

It is noteworthy that the UN General Assembly invites Member States, other stakeholders and UNWTO to support the activities carried out by the countries of Central Asia in order to promote sustainable tourism development in the region, and in this regard:

- expand cooperation in the field of tourism with the countries of Central Asia;

- contribute to the development of the main directions of a consolidated and comprehensive policy for sustainable tourism development in Central Asia, taking into account the specifics and level of economic development of each country in the region;

- join forces for the implementation and application of innovative technologies for the modernization of the tourism industry in Central Asia.

It must be emphasized that the document encourages Member States to participate in major events that can contribute to the development of tourism in the region.

The unanimous adoption of this resolution of the UN General Assembly is a clear indicator of the full support by the international community of the state policy of the leadership of Uzbekistan on the development of tourism, the strengthening of good neighborly relations between the countries of Central Asia based on deepening ties in the fields of science, technology, innovation and tourism.