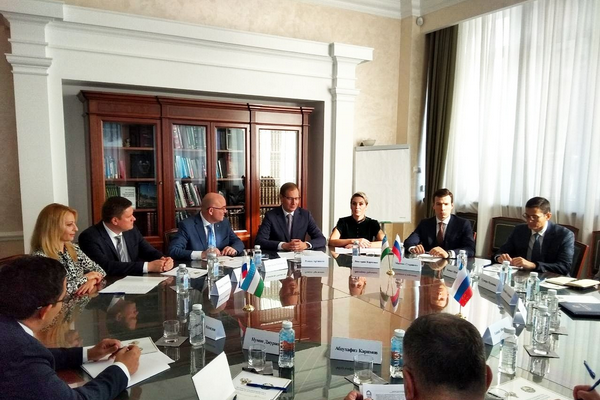 Tashkent, Uzbekistan (UzDaily.com) -- A delegation of the Ministry of finance of the Republic of Uzbekistan had meetings with the Federal Treasury of Russian federation within the framework of the IV Moscow financial forum

The working group includes the heads of departments of the ministry under the leadership of the Deputy Minister of Finance of Uzbekistan Shakhrukh Sharakhmetov.

Since 2017, a Memorandum on technical cooperation has been in force between the Federal Treasury of the Russian Federation and the Ministry of Finance of the Republic of Uzbekistan. As part of the memorandum, a joint plan for 2018 was agreed. Mutual trips to exchange experience on the issues the development of the sphere have taken place within this period.

- We constantly monitor the ongoing reforms realized by the Russian Treasury in the public sector, these reforms have successfully been implemented into the financial system. We intend to strengthen further interaction,” noted Sh. Sharakhmetov.

The delegates also got acquainted with the activities of the territorial treasury department in the city of Moscow. An exchange of views took place on issues such as implementation of treasury support for contract and subcontracts, the application of an identifier to them and the procedure for authorizing relevant operations.

At the end of the meeting, the parties signed a Cooperation Plan between the Federal Treasury of the Russian Federation and the Treasury of the Ministry of Finance of the Republic of Uzbekistan for 2019-2020. The document includes further mutual study of the experience of both the Republic of Uzbekistan and the Russian Federation in various areas by organizing visits, interdepartmental exchange of information on legislation and IT systems, and other joint activities.