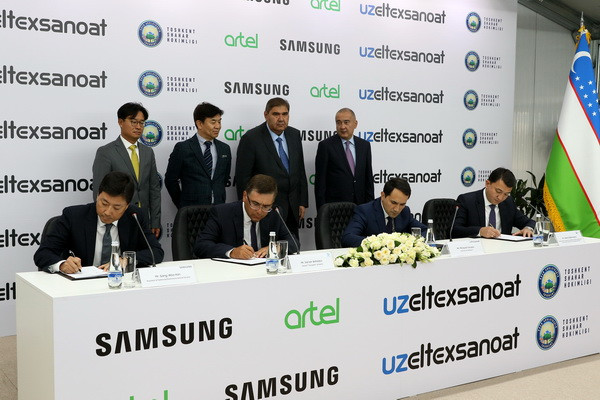 Tashkent, Uzbekistan (UzDaily.com) -- Today, on 9 September, a solemn ceremony of signing a memorandum of understanding between the Technopark companies, the Uzeltehsanoat Association and Samsung Electronics was held. The memorandum was dedicated to the project “Organization of the production of refrigerators”.

At the ceremony, the Deputy Prime Minister of the Republic, Elyor Ganiev, as well as the president of Samsung Electronics, Kim Hyun Suk.

Under the new agreement, companies will begin production of refrigerators under the Samsung brand. It is planned that 80% of the produced refrigerators will be exported to the CIS.

“The socio-economic transformations taking place in Uzbekistan today designate our republic for international partners as an open, transparent, accessible country,” Elyor Ganiev noted in his speech, “Therefore, we hope that cooperation with the Republic of Korea in these new conditions, when we "They have taken very important steps to liberalize the economy, improve the investment climate, and create new favorable conditions for our common business."

The production of refrigerators is planned for the near future. At the moment, work has already begun on the construction of a new plant on the basis of the existing Tashkent Mechanical Plant JSC.

It is worth noting that the production of Samsung refrigerators is a very important, but only an initial stage. In the future, production will be expanded and other projects launched. It is also worth noting separately that the new cooperation is contributing to the development of the electrical industry of Uzbekistan, as well as increasing the volume of production of imports and exports. The development of this sphere was the main topic of the meeting of 22 May 2019, where the President of Uzbekistan Shavkat Mirziyoyev called for increasing the share of Uzbekistan's exports in the regional market.

The launch of such projects clearly indicates that Uzbekistan is gradually rising to a leading position in Central Asia in the production of household appliances. Already now in the list of CIS countries there is practically no single state that could compete with the Republic of Uzbekistan in this area.