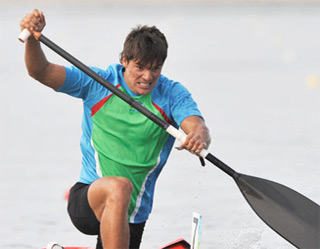 Tashkent, Uzbekistan (UzDaily.com) -- Two time world champion Vadim Menkov from Uzbekistan could not win medal of the Olympic Games in London in the of Men's Canoe Single (C1) 1000m competition.

Vadim Menkov started well the race and he was first after the half of the distance. But Menkov could not keep the pace and finished just fourth. His time was 3:49.255.