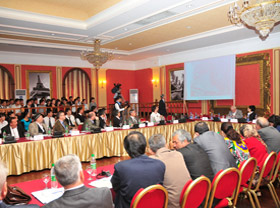 The event was organized by the Fund Forum in conjunction with MEROS Association of Antiques of Uzbekistan, it adds to the scientific facet of the Art Week.

Academician of Uzbekistan Science Academy Yuriy Buryakov spoke about Kanka site of ancient settlement and ancient Chach city. Academician spoke about discoveries, including jug at the age of 2,000 years. The exhibition, dedicated to results of archeological excavations in Kanka site, was presented at the Youth Create Center in Tashkent.

Kato Kudzo, Professor, Director of the Silk Road International Academy (Japan), made a report on archeological excavations in Termez. Kudzo presented works of his team for last 12 years.

Imasha Gadjieva from Azerbaijan briefed participants about means on promotion of archeological objects and historic sights, such as visual information boards. It was said that such tools can play significant role in preservation historic-cultural monuments.

Amriddin Berdimuradov, director of Archeology Institute of Uzbekistan Science Academy, presented interesting topic. He said Uzbekistan possesses unique monuments and specially created groups will all monuments till the end of 2012.