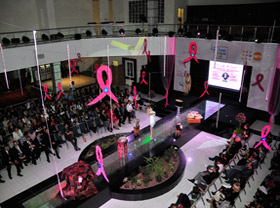 Tashkent, Uzbekistan (UzDaily.com) -- A charity auction “Action 14” was held at the National Art Center within the Art Week Style.Uz on 11 October 2010.

The charity auction was directed at raising funds for treatment of women with breast cancer and other oncological diseases.

The event was organized by the National Association of Breast Cancer “For Life”, Jenskoye Sobraniye, Office of European Coalition on fighting breast cancer EUROPA DONNA-Uzbekistan at the assistance of the Fund Forum and UNFPA.

Fourteen women from 12 regions of Uzbekistan, Tashkent city and Karakalpakstan, who need urgent treatments, were selected as beneficiaries of the auction.

Eight lots were put into auction. Among lots were exclusive models and ornaments from famous Uzbek designers. The organizers put to auction lyagan of Chingiz Ahmarov, three pillows, bags from adras, jacket from batic, etc.

Guests of the auction were active and there was real fight for some of lots.

Over 5,000 women across Uzbekistan underwent diagnosis for breast cancer and 132 women with breast cancer received medicaments for 760 million soums.