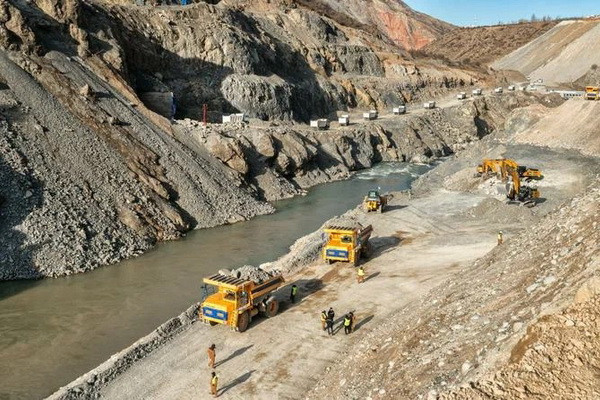 Tashkent, Uzbekistan (UzDaily.com) -- Last week, a significant event took place - the blocking of the channel of the Lower Chatkal River in Tashkent region. According to forecasts, in three years the Nizhnechatkalskaya HPP with a capacity of 90 MW will be put into operation, capable of generating electricity eleven months a year.

It is noted that now the water will flow through a specially built tunnel. Over time, the turbines of four hydroelectric units of the Nizhnechatkalskaya HPP will rotate here, generating 22.5 MW of electricity each. This will make it possible to annually save 91.28 million cubic meters of gas currently burned at thermal power plants. And also to increase the degree of use of "green" energy, because our country is aimed at active involvement in projects for the introduction of renewable energy.

As A. Sanginov explained in his speech, the purpose of blocking the riverbed is the intention to build a dam for a new hydroelectric power station here. In total, over the past four years, on behalf of the President, more than 20 hydroelectric power plants have been built, the total capacity of which has reached 456 megawatts.

Designers from Turkey, Russia and Iran are participating in the construction of the Nizhnechatkalskaya HPP. They advise the specialists of Hydroproject JSC. More than three thousand people are involved in the construction work. And after the launch of the HPP, more than 120 young domestic experts will be employed here.

It is also reported that with a dam height of 50 meters, the volume of the reservoir will be about 6.8 million cubic meters. The hydraulic structure is scheduled to be completed by 2025. HPP after commissioning will provide stable electricity to 125,000 families.

According to the representative of the Turkish company M. Uzdelim, the complexity of the project was that there is a lot of sediment in the streams of Chatkal. Therefore, it was necessary to choose the optimal dam construction option for the most efficient operation of the hydroelectric power station. Changing the type of dam was the solution to the problem.

- When designing the tunnel, we were engaged in the study of the soil and the solution of hydraulic issues, - says the specialist. - Our institute has a hundred-year history. At the same time, they participated in the construction of the Tupalang and Charvak hydroelectric power stations. We will help in the inspection of hydraulic structures, reconstruction of control and measuring equipment, ensuring the safety of the dam of the Nizhnechatkalskaya hydroelectric power station. There is an option with our participation in a joint project with Hydroproject JSC to create an analytical center for the safety and reliability of hydraulic structures in Uzbekistan.