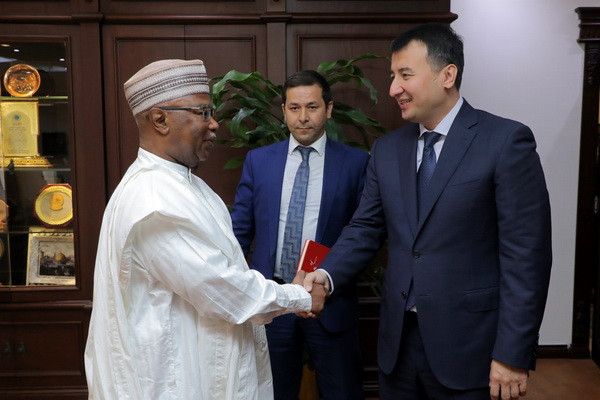 Tashkent, Uzbekistan (UzDaily.com) -- On 15 August, in Jeddah (Saudi Arabia), on the eve of the visit of the President of Uzbekistan to Saudi Arabia, a meeting was held between the Deputy Prime Minister - Minister of Investments and Foreign Trade of the Republic of Uzbekistan Jamshid Khodjaev and the Secretary General of the Organization of Islamic Cooperation Hissein Brahim Taha.

During the meeting, the parties exchanged views on the current state and prospects for the development of cooperation between Uzbekistan and the OIC.

The Uzbek side noted the importance of the OIC as one of the influential international intergovernmental Islamic organizations that successfully promotes promising interregional and international initiatives of the Islamic world, as well as ensures the active development of relations between the participating states in the political, trade and economic, transport and communication and cultural and humanitarian spheres. Comprehensive support was expressed for the further development of the OIC as an effective dialogue platform based on the principle of "Islam is the religion of peace and development."

It was emphasized that Uzbekistan continues to make a positive contribution to strengthening the role and importance of the OIC in the modern world. The leadership of the Organization expressed its readiness to make every effort to develop multifaceted cooperation with Uzbekistan in the political, trade, economic, transport, communication and cultural and humanitarian spheres in order to bring bilateral cooperation to a qualitatively new level.

The prospects for the implementation of specific projects in the field of environmental protection were discussed, bearing in mind measures to overcome the consequences of the drying up of the Aral Sea and expand the access of the country’s population to clean drinking water. An agreement was reached on a systematic basis to exchange existing experience and advanced technologies in these areas.

The parties also agreed on the need to combine efforts to develop new initiatives to develop the transport and logistics interconnectedness of Uzbekistan with the member states of the Organization.

As a result of the meeting, an agreement was reached on intensifying practical interaction aimed at expanding cooperation between the OIC and Uzbekistan. The parties also agreed to expedite the negotiation and approval of the Cooperation Agreement within the framework of organizing events "Khiva - the tourist capital of OIC 2024".