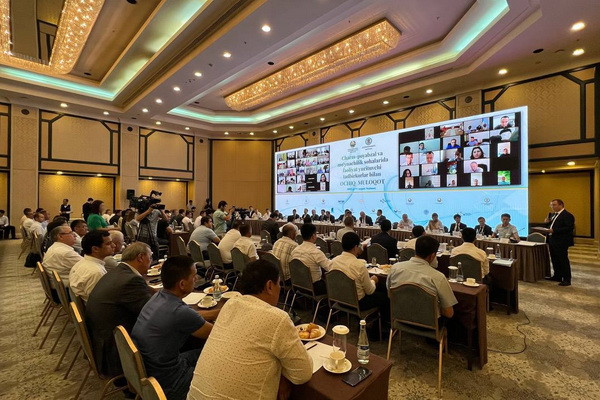 Tashkent hosts an open dialogue between the Uzcharmsanoat Association and entrepreneurs

Tashkent hosts an open dialogue between the Uzcharmsanoat Association and entrepreneurs

Tashkent, Uzbekistan (UzDaily.com) -- On 11 August 2022, an open dialogue of the Uzcharmsanoat Association with entrepreneurs operating in the leather and footwear, fur and fur industries was held.

This event was organized in order to carefully prepare for an open dialogue between the President of the Republic of Uzbekistan Shavkat Mirziyoyev and entrepreneurs, which is scheduled for August this year.

As you know, on 20 August 2021, the President of the Republic of Uzbekistan Shavkat Mirziyoyev held his first open dialogue with entrepreneurs, where more than 15,000 proposals and questions were systematized, and decrees of the Head of State were adopted to solve problems. During that event, the President declared 20 August the “Day of Entrepreneurs”, in connection with which he proposed to hold an open dialogue with business representatives dedicated to the date every year.

So, in August this year, it is planned to hold an open dialogue between the Head of State and entrepreneurs. In order to properly prepare for this event, study the problems that concern entrepreneurs, and summarize proposals that can stimulate the further development of the business environment in our country, a special headquarters was organized to receive and analyze applications received by the call center and directly to the Association Uzcharmsanoat.

To date, the headquarters of the Association has received about 1,000 applications and about 40 proposals. Problems are being studied and most of them are being solved right on the spot in cooperation with the relevant ministries, departments and organizations. In addition, an up-to-date information package is being formed, which absorbs and groups suggestions and comments.

Before talking about the problems and proposals outlined, it should be noted that as a result of the special attention paid by the President to the leather and footwear industry, today this industry is becoming one of the leading in our republic, moreover, the task has been set to turn it into one of the stable "drivers" of the economic growth.

Thanks to the incentives created in the country for entrepreneurs and investors to produce export-oriented finished products based on deep processing of raw materials, it is expected that by the end of this year, industrial products worth 6.8 trillion soums will be produced in our country. Growth compared to last year will be 120 percent.

In order to expand the volume and geography of exports of products to foreign markets, the participation of industry enterprises in international exhibitions and fairs is ensured. As a result, by the end of the year, exports of leather and footwear products are planned to reach US$500 million.

As part of the implementation of 120 investment projects, investments in the amount of US$218 million are expected, US$58 million of which are foreign direct investments, and 65,000 new jobs will be created.

At the same time, business entities operating in the leather and footwear and fur and fur industries have a number of problematic issues that need to be addressed. Among the most frequently received applications:

2) an inadequate level of creation of infrastructure conditions for the implementation of investment projects, delays in putting land plots up for auction and barriers to privatization, and high amounts of payments;

3) systemic problems associated with VAT refunds and logistics when supplying products for export;

During the open dialogue organized by the Uzcharmsanoat Association with the participation of representatives of a number of ministries, departments, banks and other organizations, most of the applications received were resolved. Issues that require deeper analysis and more time for proper consideration are included in the minutes of the meeting and submitted for consideration at the republican level.

At the same time, proposals and comments, the solution of which can only be possible at the level of the head of state, will be submitted to the responsible authorities for inclusion in the list of questions for the open dialogue of President Shavkat Mirziyoyev with entrepreneurs on August 20.

The Uzcharmsanoat Association, which unites about 800 enterprises, faces great challenges, including creating conditions for the modernization and renewal of the leather and footwear and fur and fur industries, the implementation of program goals and guidelines set by the head of state for the medium and long term. To achieve all these priorities, a lot of work remains to be done in conjunction with responsible ministries and departments, khokims of all levels and, of course, heads of enterprises for which new opportunities, export markets and development prospects are opening up today, but most importantly, their voice is heard.