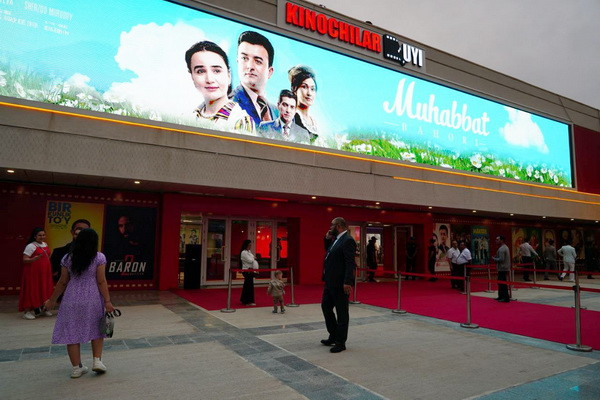 Tashkent, Uzbekistan (UzDaily.com) -- On 27 May, a premiere of the film "Muhabbat bakhori" directed by Ibrahim Rasulov took place in the large hall of the House of Cinematographers.

After the screening, a creative meeting was held with the film crew and the actors of the film.

"Muhabbat bakhori" tells the story of the creative and life path of two great poets, writers, public figures - Hamid Alimjan and Zulfiya. The film is based on the story of their love and fidelity, the difficulties they had to face throughout their lives.

“This is a film about the love of two poets, about the fact that despite all the trials of life - Stalin’s repressions, the War, they remained true to each other and their beliefs, singing their land and their people. We hope that the film will appeal, first of all, to young people. That is why schoolchildren in Kashkadarya were the first to see the film. After watching, an essay competition was held among schoolchildren under the motto “We will learn from our movie heroes,” said Firdavs Abdukhalikov, Director General of the Cinematography Agency of Uzbekistan.

"The work on the film lasted about 3 years, because in recent years the artistic council has paid increased attention to the quality of films. The film has been criticized more than once by members artistic council, went for revision. Many scenes were filmed. And today’s film is the result of the work of the Arts Council, which repeatedly reviewed the film at meetings and showed a tough position regarding its quality," said Feruza Nadyrova, Secretary of the Arts Council.

“When I was shooting this film, I knew that schoolchildren should see it first of all, and I am very glad that schoolchildren were the first to see the premiere. For me, as a director, it was a great gift. I would like to believe that the film will find a response in the hearts and souls of young people. They have a lot to learn and something to admire, having learned the history of the creative and life paths of two great poets,” said Ibrahim Rasulov, director of the film.

The film crew collected, studied and displayed unique facts that are in the archives not only of Uzbekistan, but also far beyond its borders. The viewer will be able to learn the little-known details of the life path of Hamid Alimjan and Zulfiya.

“I took the shooting of the film with particular trepidation. It was a great honor for me to play the role of the great cultural figure and poet Hamid Alimjan. It was a pleasure to work with director Ibragim Rasulov and the entire professional team as a whole. I am especially pleased that the premiere took place today, May 27, on my birthday. I sincerely wish the tape to find its audience,” shared Khamza Khasanov, who played the role of Hamid Alimjan.