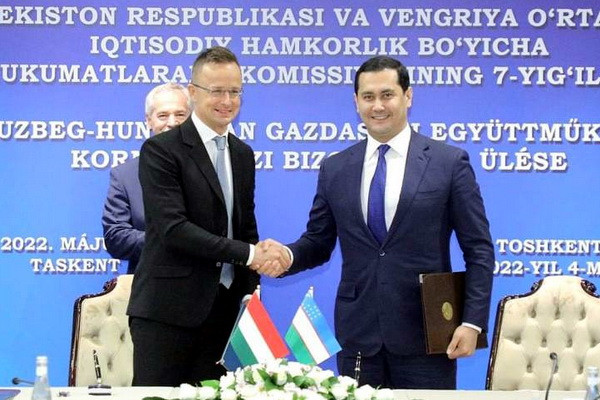 Tashkent, Uzbekistan (UzDaily.com) -- On 4 May this year, the 7th meeting of the Uzbek- Hungarian Intergovernmental Commission for Economic Cooperation (IPC).

The meeting was attended by heads of key ministries, departments, industry associations, commercial banks and educational institutions, as well as diplomatic missions of the two countries.

During the meeting, issues of further development of cooperation in the investment, industrial, trade and economic, banking and financial, cultural and humanitarian spheres were considered and agreed upon.

During their speeches, the heads of delegations of the two countries noted the regular and systemic nature of bilateral interdepartmental contacts at the level of leaders and experts, as well as the invariable focus of the two states on the progressive expansion of mutually beneficial cooperation in areas of common interest. A significant impetus to the development of Uzbek-Hungarian relations was given largely thanks to the efforts and will of the Heads of the two states. Mutual readiness was expressed to strengthen partnership in the areas of investment, trade, tourism, financial, technical, cultural, humanitarian and interregional cooperation.

It was announced that over the past 4 years, the volume of Uzbek-Hungarian trade has increased 3 times and showed growth even in 2020-2021, despite the negative consequences of the pandemic. Significant potential for diversifying markets and trade flows, as well as increasing mutual supplies of products from the chemical, food, engineering, pharmaceutical and textile industries was noted.

Particular emphasis was placed on joint actions to develop industrial cooperation between entrepreneurs of Uzbekistan and Hungary. The prerequisites for this are the growing interest of Hungarian business in expanding activities in Uzbekistan and the significant industrial potential of a number of sectors of the Uzbek economy, including pharmaceuticals and biotechnology, production of building materials, engineering, chemical and textile industries. The heads of the relevant sectoral departments of the two countries made specific project proposals, outlining vectors for further deepening practical cooperation within each area. Preliminary agreements were reached on the implementation of joint investment projects aimed at creating high-tech industries with the aim of producing products with high added value and, in the future, exporting them to the markets of third countries.

In this context, the parties spoke in favor of intensifying joint work to bring together the business communities of the two countries and agreed to hold a regular meeting of the Uzbek-Hungarian Business Council and a business forum with the participation of Uzbek and Hungarian entrepreneurs this year.

An agreement was also reached on the development and approval in the near future of a joint Industrial Cooperation Program for 2022-2023 with the inclusion of promising projects in priority sectors.

Special attention was paid to the development of interregional cooperation. The meeting participants discussed specific steps to intensify practical cooperation at the regional level within the framework of the Agreement on Interregional Cooperation signed last year. An agreement was reached on the creation of permanent working groups under the leadership of the deputy heads of the regional administrations of Tashkent, Navoi and Jizzakh regions of Uzbekistan and the Peshten, Veszprem and Fejer regions of Hungary, respectively, as well as the development of step-by-step programs for interregional cooperation, including holding mutual exhibitions, business forums and trade missions. It was agreed to hold a joint Forum of Regions in Uzbekistan in the second half of this year with the participation of representatives of the business circles of the two countries.

A number of agreements were also reached in the cultural, humanitarian and tourism spheres: holding the Days of Cinema and Culture of Uzbekistan and Hungary in the second half of this year, allocating additional quotas for Uzbek applicants to study at Hungarian universities, including within the framework of the scholarship program of the Hungarian government "Stipendium Hungaricum ”, development of joint educational programs with the involvement of leading Uzbek and Hungarian educational institutions, as well as holding the next joint Forum of Rectors of Universities of Uzbekistan and Hungary. The parties especially noted the signing on the margins of the IGC of the Agreement on cooperation in the field of tourism, designed to create favorable conditions for increasing mutual tourist flows.

As a result of the meeting, the final protocol was signed, reflecting all the agreements reached, as well as the agreed projects and initiatives.