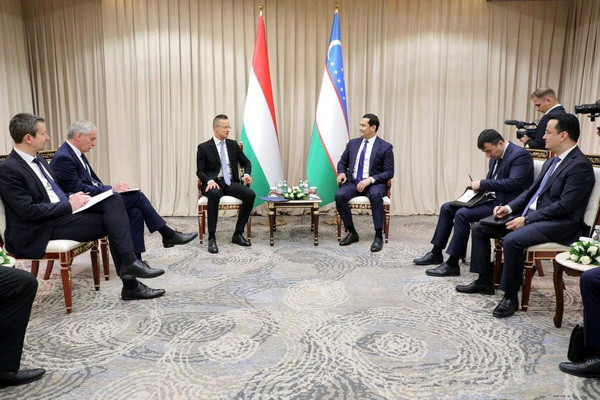 Tashkent, Uzbekistan (UzDaily.com) -- On 4 May 2022, a meeting was held in Tashkent between the co-chairs of the Uzbek-Hungarian intergovernmental commission for economic cooperation - Deputy Prime Minister - Minister of Investments and Foreign Trade of Uzbekistan Sardor Umurzakov with the Minister of Foreign Affairs and Foreign Economic Relations of Hungary Peter Szijjarto.

During the meeting, the parties considered topical issues on the agenda of bilateral cooperation in the political, investment, trade, economic, financial, technical, transport and logistics, cultural, humanitarian and interregional spheres, the implementation of existing agreements and prospects for deepening partnerships in priority areas.

The parties welcomed the consistent and systematic development of interaction at the interdepartmental level, as well as the effective work to strengthen direct ties between representatives of the business circles of the two countries. An increase in mutual deliveries of textiles, food products, pharmaceutical and chemical products was noted. Investment cooperation is also increasing: Hungarian companies and banks are successfully implementing projects in Uzbekistan and are looking for new areas for expanding partnerships.

During the dialogue, the course of cooperation in individual sectors was substantively reviewed. Thus, in particular, the close nature of interaction in the pharmaceutical sector was noted - work is underway to create new joint ventures in Uzbekistan for the production of medicines, as well as accelerated registration of manufactured products. An agreement was reached on organizing a visit to Uzbekistan of a delegation of leaders of leading Hungarian companies in the field of pharmaceuticals to develop new areas of investment cooperation.

Further steps have been outlined to promote projects under development in the fields of agriculture, food and chemical industries. The parties comprehensively discussed all the existing issues and developed algorithms for further interaction to resolve them.

Speaking about the opportunities for intensifying cooperation in the field of transport, the meeting participants discussed measures to accelerate the signing of the Intergovernmental Agreement on Air Communication between the transport departments of the two countries and reached an understanding on a number of important issues.

Particular attention was paid to the development of cultural and humanitarian cooperation, including the expansion of ties in the field of education. An agreement was also reached on intensifying contacts in the field of science and innovation.

Following the meeting, the heads of delegations of the two countries exchanged additional proposals for further expanding bilateral cooperation and agreed to develop a dialogue aimed at promoting agreed projects and initiatives.