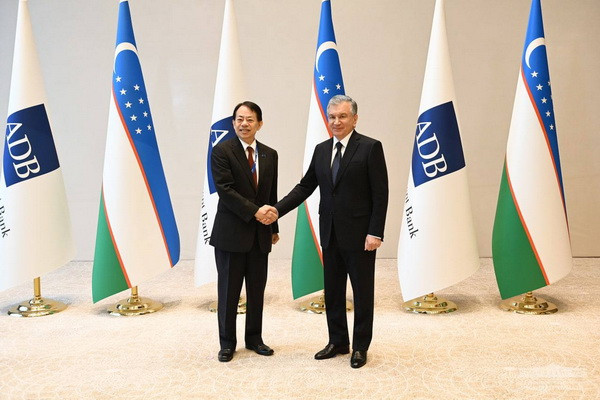 Tashkent, Uzbekistan (UzDaily.com) -- On 24 March, as part of the events of the Tashkent International Investment Forum, President of the Republic of Uzbekistan Shavkat Mirziyoyev received the President of the Asian Development Bank Masatsugu Asakawa.

At the beginning of the meeting, the head of the Bank sincerely congratulated the Leader of Uzbekistan on the successful holding of the Investment Forum, which brought together leaders, leading international financial institutions and business representatives.

Topical issues and promising areas for further deepening the strategic partnership between Uzbekistan and ADB were considered.

The head of our state sincerely congratulated the ADB President on his recent re-election for another term and expressed special gratitude for the assistance provided in promoting the reform program in New Uzbekistan, including in overcoming the consequences of the coronavirus pandemic.

The dynamic development of bilateral relations was noted with satisfaction. The project portfolio has doubled in recent years and now exceeds $9 billion. The rate of assimilation of investments within the framework of joint projects has also doubled.

The technical assistance provided by the Bank to the irreversible reforms being carried out in our country, including in the field of ensuring macroeconomic stability, the financial sector, modernizing energy, transport and infrastructure, and unlocking the potential of human capital, was highly appreciated.

At the meeting, special attention was paid to the preparation of a new program of full-scale cooperation between Uzbekistan and ADB.

The priorities of interaction are the accelerated introduction of the "green" economy, the development of mechanisms for mixed financing of projects, the expansion of programs to finance business, including women’s and youth entrepreneurship, the introduction of effective public-private partnership mechanisms, and support for projects in the field of education and healthcare were considered.

An agreement was reached on the adoption of a joint "road map" to promote priority areas of strategic partnership between Uzbekistan and the Asian Development Bank.