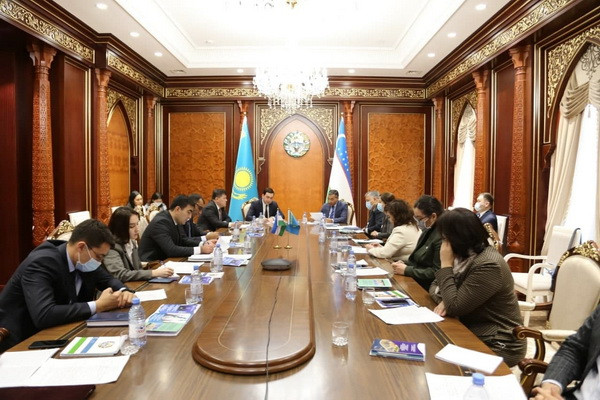 Tashkent, Uzbekistan (UzDaily.com) – A delegation of scientific circles of the Republic of Uzbekistan visited the city of Nur-Sultan (Republic of Kazakhstan) on 2 December.

The purpose of the visit of the Uzbek delegation was to discuss the prospects for cooperation between scientific and analytical organizations and think tanks of Uzbekistan and Kazakhstan. During its stay, the Uzbek delegation took part in a "round table" on the topic: "On the state and prospects of the Kazakh-Uzbek strategic partnership."

Leading experts from research and analytical structures of the two countries, as well as representatives of diplomatic and official circles, took part in the event as speakers. For the purpose of a professional and comprehensive discussion of issues of bilateral cooperation, representatives of the ministries and departments of the two countries, public organizations at the level of leaders and their deputies took part in the round table.

In his report, the head of the sector of the Center for Economic Research and Reforms (CERR) under the Administration of the President of the Republic of Uzbekistan Khurshid Asadov noted the growth of indicators of trade and economic cooperation between Uzbekistan and Kazakhstan, which has been dynamically developing over the past four years. The analysis showed that there is great potential to increase the pace of mutually beneficial cooperation and the development of cooperative ties.

The real evidence of the progressive development of the Kazakh-Uzbek partnership is the increase in trade and economic cooperation. Speaking about changes in the indicators of Uzbekistan's foreign trade with foreign countries, the CERR expert noted that in 2020 Kazakhstan took third place with a share of 8.3%, second in trade of our country with the CIS countries with a share of 25.5% and first in trade with Central Asia with a share of 61.1%.

The current year has become fruitful for cooperation and interaction between Kazakhstan and Uzbekistan. So, according to the results of 10 months of 2021, compared to the same period of 2020, the indicators of foreign trade between Uzbekistan and Kazakhstan increased significantly: trade turnover increased by 36.5% to US$3.2 billion, exports by 30.5% to US$950 million, import by 39.3% to US$2.2 billion.

Speaking to the participants, H. Asadov substantively dwelled on the development of investment cooperation and cooperation. So, according to calculations, the number of enterprises with the participation of the capital of Kazakhstan for the period from the beginning of 2019 increased by 2.1 times from 510 to 1,056 enterprises, in particular, since the beginning of this year, 166 enterprises with Kazakhstani capital have been created.

Uzbekistan and Kazakhstan have great unrealized potential for a significant expansion of economic cooperation both in bilateral and multilateral formats with the participation of other Central Asian countries (CA).

For example, CERR calculations carried out according to the methodology of the International Trade Center (ITC) show that there is an unrealized export potential of the CA countries in mutual trade in the amount of more than one billion dollars.

In conclusion, the CERR expert noted that with the growth of the economies and population of Uzbekistan and Kazakhstan, the total potential of the internal market of the two countries will increase, and the expansion of cooperation ties and mutual trade between them will increase their investment attractiveness, which will accelerate the pace of development of the economies of the two countries.

In conclusion, the participants expressed special gratitude to colleagues from MICA, KISS, ISMI, CERR who make an invaluable contribution to the dynamic development of cooperation between the analytical structures of Uzbekistan and Kazakhstan.