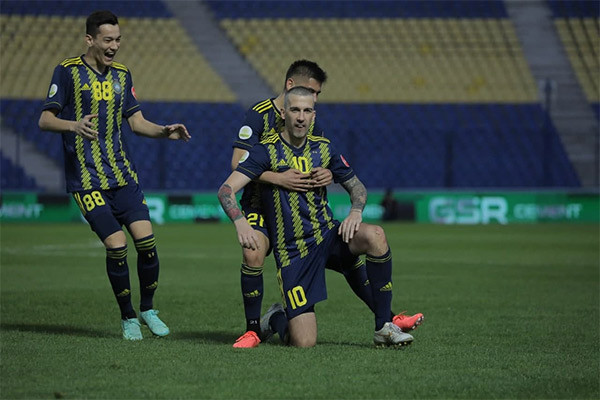 Pakhtakor becomes the champion of the Super League of Uzbekistan

Pakhtakor becomes the champion of the Super League of Uzbekistan

Tashkent, Uzbekistan (UzDaily.com) – Tashkent-based Pakhtakor became the champion of the Super League of Uzbekistan ahead of schedule, defeating Kyzylkum with a score of 4:2.

In the 22nd round of the Super League, Pakhtakor won 4:2 against Kyzylkum. On the 3rd minute, Kyzylkum player Mustafoev made a mistake and became the author of own goal.

On the 13th minute, Grigalashvili deceived the goalkeeper of "Pakhtakor" and equalized the score. At the end of the first half, the teams exchanged one goal eacj. Dragan Ceran scored a penalty after the Kyzylkum played the ball with the hand. In the last seconds of the first half, Boydullaev scored from the flank with his head and again restored the balance in the score.

In the second half, Pakhtakor strengthened the attack and took the initiative into their own hands. On the 60th minute, for a rough game against Abror Ismailov, the penalty was given. Dragan Cheran scored the goal from the penalty. And in the 66th minute Dragan scored hat-trick from the free-kich.

After the 22nd round, Pakhtakor recorded 54 points. Sugdiyona is in second place with 40 points. AGMK also has the same number of points.