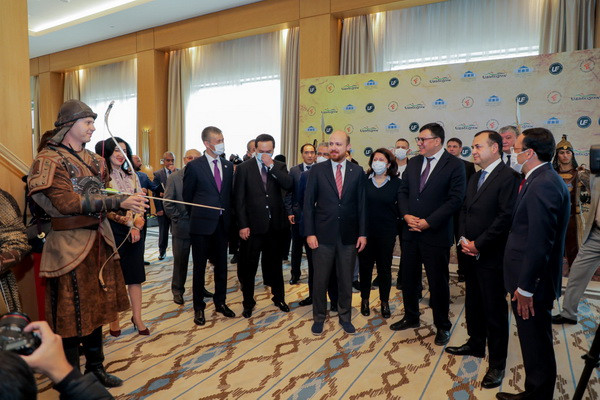 Tashkent, Uzbekistan (UzDaily.com) -- On 8 October, an international conference "Prospects for the development of ethnosport in Uzbekistan" was held at the Hyatt Regency Tashkent hotel. The event was organized by the Ministry of Tourism and Sports of the Republic of Uzbekistan.

The conference was attended by the chairman of the World Ethnosport Confederation Nejmeddin Bilal Erdogan, representatives of the diplomatic corps of the Turkish Republic, specialized associations of sports games, athletes and the media. The event was opened by the Deputy Prime Minister - Minister of Tourism and Sports Aziz Abdukhakimov: - Since ancient times, the People’s Games have played an important role in the formation of statehood and social cohesion. Today, they serve to ensure that a person becomes physically healthy, resilient, patient, healthy and knows his roots.

The fact that the history of the people has been formed over millennia is reflected in its material and cultural values, in its ethnography. The variety and number of our folk games testifies that our culture is one of the oldest in the world, said Aziz Abdukhakimov, speaking at an international conference.

At the event, the creation of the National Ethnosport Association was officially announced and its new leader, Oybek Norinboev, was presented. According to historical data, the Uzbek people for many centuries were famous for their wrestlers-palvans and legendary horsemen, who became the founders of national sports of Uzbekistan, such as kurash. belbogli kurash, ulok-kupkari, turon, boykurgan. Thanks to the reforms carried out in our country, there is a great opportunity to present national sports on the international arena, which are rightfully an integral part of the cultural heritage of Uzbekistan.

According to experts, holding such events undoubtedly contributes to the expansion of international cooperation in the development of sports tourism, improving the image of Uzbekistan, promoting its tourism potential and opportunities on the world stage. At the end of the event, a Memorandum of Cooperation was signed between the World Ethnosport Confederation and the newly created National Ethnosport Association of Uzbekistan.