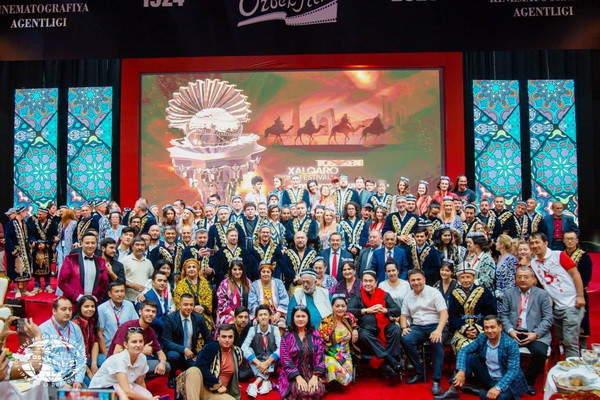 Tashkent, Uzbekistan (UzDaily.com) -- At the closing ceremony of the Tashkent International Film Festival, its participants addressed the President of Uzbekistan Shavkat Mirziyoyev. The address was read from the stage by the famous Russian director Timur Bekmambetov.

Participants of the "Pearl of the Silk Road" film festival expressed their gratitude to the head of the Republic for the revival of this legendary event.

“The 13th Pearl of the Silk Road International Film Festival, revived on your initiative, after almost a quarter of a century of hiatus, has brought together filmmakers from nearly fifty countries of the world. During the week, the best works of world cinema of recent years were shown on the screens of Uzbekistan, an exchange of views on changes in world cinema was held, master classes for young people were organized. Thanks to the festival, people who had not seen each other for a long time because of the pandemic that swept the world met again, long-awaited friendly meetings and new acquaintances took place. We are pleased to note that this grandiose film festival has incorporated all the traditions of the Tashkent International Film Festival of Asia, Africa and Latin America and was held at a high level on the basis of international requirements and standards,” the message says.

The participants also noted the large-scale changes and reforms that have taken place in Uzbekistan.

“Having visited the regions of sunny Uzbekistan, the participants of the film festival saw how the appearance of cities has changed, how the country is changing. And again and again we were convinced of the hospitality of the Uzbek people, saw how warmly they greeted and waited for us. We were especially impressed by the youth and the conditions that you have created to support the young generation of Uzbekistan. A striking example of the above is the held competition for young filmmakers from 22 countries of the world "Cinema in 5 days", - the address underlines.

In addition, the participants of the Tashkent International Film Festival, as representatives of the cinema sphere, are grateful for the support of the film industry and cinematography, the revival of Uzbekfilm, which will soon turn 100 years old, its technical equipment, the opening of a branch of the All-Russian State Institute of Cinematography, the revival of the film fund and the return of standard copies of films of Uzbek cinema.

"It should be especially noted that good traditions of creating joint film production with other countries have been revived in Uzbekistan, and more than 10 important documents were signed at this film forum alone, which will give a new impetus to international cooperation in the field of cinematography," the appeal says.

In conclusion, the participants of the film festival expressed their readiness to make efforts and do everything possible to make the film industry of Uzbekistan one of the most developed industries in the world.

It should be noted that the appeal to the President was unanimously adopted at the Forum of Delegations of the XIII Tashkent International Film Festival "Pearl of the Silk Road".