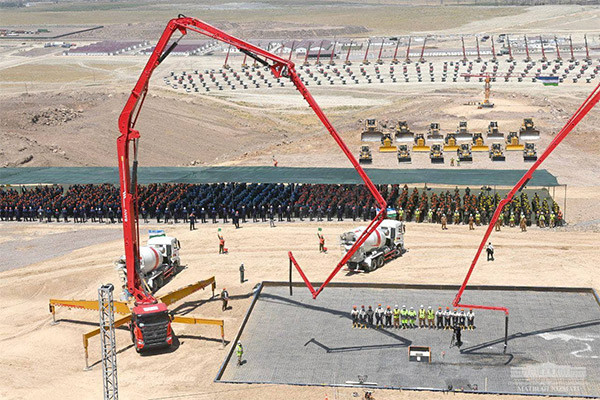 Tashkent, Uzbekistan (UzDaily.com) -- A solemn ceremony to mark the start of the construction of the third copper processing plant was held at Almalyk Mining and Metallurgical Complex.

“I cordially congratulate all of you on today’s joyful event – the start of the construction of a new copper processing plant at Almalyk Mining and Metallurgical Complex”, President Shavkat Mirziyoyev said. – On the eve of the 30th anniversary of the independence of our country, we are starting with good hopes the implementation of such a large-scale project. This important event is vivid evidence of the beginning of a new era not only in the life of the plant, but also in the history of domestic industry.

It was noted that in recent years the activity of the plant has reached a high level, copper production increased 1.5 times and reached 150 thousand tons.

Over the past three years, 475 wells with a total length of 206 thousand meters have been drilled at the fields of the plant. More than 100 thousand ore samples from these deposits were thoroughly analyzed in foreign laboratories. According to international assessment criteria, total copper reserves are estimated at 45 million tons, and gold reserves at more than 5 thousand tons. These are the highest rates in the world.

It was also found that the ore mined here contains silver, molybdenum, selenium, tellurium, rhenium and other rare metals.

Global attention is increasing to the green economy and renewable energy sources. The electrical industry is rapidly developing. As a result, copper demand is projected to grow by at least 40 percent by 2030. This means that global demand for the products of the Almalyk plant will be steadily high for many years to come.

One of the breakthrough steps in this direction will be the construction at Yoshlik-1 deposit of a third copper processing plant worth $2 billion. At the first stage, this enterprise will process 60 million tons of ore per year.

At the second stage, the processing capacity will grow to 160 million tons, which is 3 times more than today. As a result of the implementation of these two stages, by 2028 the enterprise will have an annual production capacity of 400 thousand tons of copper, 50 tons of gold and 270 tons of silver.

Thus, the Almalyk plant will become one of the world leaders in the mining and metallurgical industry.

“In the future, the volume of the plant’s products will increase by more than 3 times, and its value will increase from the current 2.5 billion to about 8 billion dollars. 11 thousand new high-tech jobs will appear.

This will expand the access of our youth to such modern professions as a geologist, engineer, technologist, designer, programmer and others.

Achievement of these majestic plans will be a truly revolutionary step”, the President noted.

The Head of the state also touched upon the prospects for the development of the mining and metallurgical industry.

From next year, geological exploration will be fully transferred to the JORC international standards. In the next 5 years, the volume of ore mining and processing through all projects in the country will increase from 130 million tons to 300 million tons per year.

Companies from Canada, France, Japan, Turkey, China and other countries are working on geological exploration and development of deposits in Uzbekistan.

The President noted that opportunities for foreign investors in this sphere will continue to expand.

In particular, it is planned to reduce tax rates on copper and gold mining from 10 to 7 percent, natural gas and oil – up to 10 percent, uranium – up to 8 percent, tungsten – from 10 to 2.7 percent. Such conditions will arouse great interest among investors.

A geological branch of the University of Pisa (Italy) will open in Tashkent to provide the industry with qualified personnel.

The ceremony was attended by Deputy Chairman of the Board of Gazprombank Alexey Matveev, Director of SRK Consulting for Central Asia Mike Beer, geologists and metallurgists, representatives of the older generation.