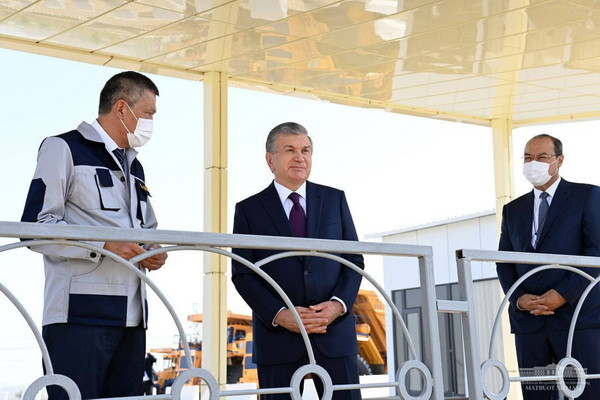 Almalyk Mining and Metallurgical Complex is a huge industrial complex that combines open and closed deposits, metallurgical and cement plants, an extensive mining and processing infrastructure.

The plant accounts for 7 percent of industrial production and 15 percent of Uzbekistan’s exports. Thanks to the attention paid in recent years, new deposits have been discovered and production has increased.

Among them is the Yoshlik-1 deposit, for the development of which an investment project worth $4 billion 894 million is being implemented. It was launched by the resolution of the President of the Republic of Uzbekistan on 1 March 2017.

The Head of the state was informed about the potential of the deposit and the activities being carried out to develop it.

65 million tons of ore per year will be mined from the deposit with an area of 11 thousand hectares. It is planned to build the third copper-processing plant with a processing capacity of 60 million tons of copper-molybdenum ore. A lime plant, a 650-megawatt power system and other infrastructure facilities will also be erected.

Over the past four years, modern geological research and excavation of more than 83 million cubic meters of soil have been carried out within the framework of the project. More than 570 special vehicles worth $415 million were involved.

This colossal project is scheduled to be launched in 2024. It is planned to employ 6,000 people.