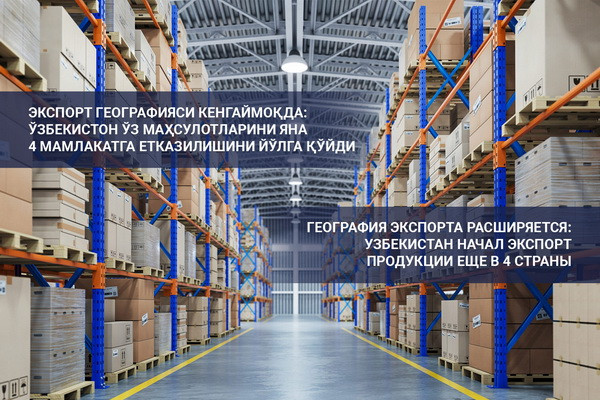 Tashkent, Uzbekistan (UzDaily.com) -- In conditions of economic growth, more and more domestic enterprises, both large and small businesses, enter the world market. In the structure of exports, the share of industrial products with high added value is noticeably growing. Every year, many international contracts are concluded, not only goods are purchased, but also equipment, and not only raw materials, but also products of our own production become the subject of export.

According to the State Statistics Committee, in January-April 2021, the country’s foreign trade turnover reached US$10,322 billion, thus decreasing by US$378.8 million (3.5%) compared to the same period in 2020.

Among the 20 large partner countries in foreign economic activity, there is also an active foreign trade balance with six countries, in particular, Afghanistan (positive balance - US$233.4 million), Kyrgyzstan (US$141.4 million), Tajikistan (US$104.4 million), Turkey (US$100.6 million), Canada (US$58.9 million) and Iran (US$16.6 million).

In January-April 2021, exports of goods and services (excluding gold exports) in the amount of US$3.4 billion were carried out, which is US$715.7 million more compared to the same period last year. Thus, we can observe an increase of 26.7%.

Due to an increase in exports of products of the garment and knitwear industry (+US$217 million), copper and copper products (+US$122 million), cars (+US$59 million), flour (+US$29 million), household appliances (+US$22 million), etc., in the period from January to April of this year, additional exports in the amount of US$660 million were provided.

Since the bulk of gas was redirected to the domestic market, the volume of natural gas exports decreased by US$82 million.

Due to the strengthening or re-introduction of restrictive measures in foreign countries against the background of a worsening epidemiological situation in the world associated with the spread of coronavirus, there is a decrease in exports in the field of aviation and tourism services (-3 million dollars and -122 million dollars, respectively).

In January-April 2021, 346 new enterprises were involved in export activities, 60 new types of goods were exported. Among them are zinc alloy, veterinary vaccines, polypropylene thread, new types of medical instruments.

The geography of export of domestic goods has been expanded to 4 countries. Now Uzbek products will now be supplied to Australia, Argentina, Dominican Republic and Suriname.

For financial support of exporting enterprises, the Export Promotion Agency allocated financial resources in the amount of 96.8 billion soums in January-April 2021, which are directed to:

- compensation for transport costs of 231 enterprises in the amount of 56.2 billion soums;

- covering expenses for participation in international exhibitions and fairs of 60 enterprises in the amount of 3.8 billion soums;

- pre-export financing of exporting enterprises, including for replenishment of working capital – US$65.8 million.

Thanks to this, during the above period, additional exports in the amount of US$62 million were carried out, export contracts for US$43 million were signed, and by the end of the year it is planned to increase the amount of export of goods to US$189 million.

In the structure of exports, industrial goods account for 35.9%, food products and live animals - 9.0%, chemicals and similar products - 8.8%.

Uzbekistan has not exported gold for eight months.

The export of fruit and vegetable products amounted to 329.5 thousand tons, and in value terms exceeded US$188 million.

The volume of exports of services in January-April 2021 decreased by 13.2% and reached US$650.7 million. It is important to note that in the export structure the lion’s share is occupied by transport services (72.8%), travel / tourism (12.3% ), telecommunication, computer and information services (6.9%).

It is noteworthy that in the period under review, Turkey (US$528.2 million) surpassed the Russian Federation (US$494.8 million) and took second place among Uzbekistan’s export partners. Together with China, Kazakhstan, Afghanistan, Kyrgyzstan and Tajikistan, these countries occupy 73.4% of the total export volume.