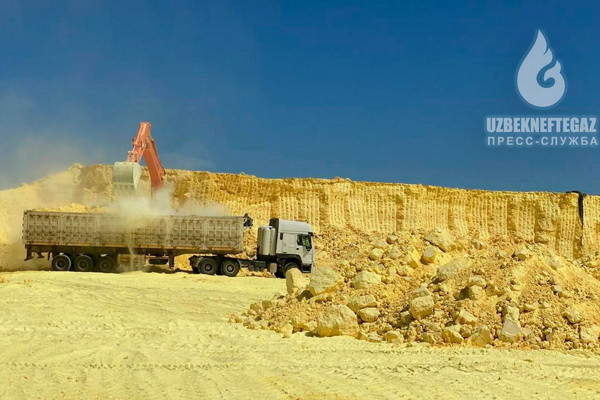 Over 500,000 tons of sulfur products worth more than US$9 million were sold at exchange auctions

Over 500,000 tons of sulfur products worth more than US$9 million were sold at exchange auctions

According to the measures taken by Uzbekneftegaz during the pandemic, satisfactory results are being achieved in the export of products manufactured in the departments and enterprises of the system. In particular, it should be noted that at the Mubarek Gas Processing Plant (Mubarek Gas Processing Plant), the sale of illiquid sulfur products is carried out at a high level.

As of 1 May, more than 500 thousand tons of sulfur products for a total amount of US$9.0 million were sold through exchange trading in the domestic and foreign markets.

Achievement of such positive results is achieved through the use of a method that has not previously been used in the sale of sulfur products. For example, the terms of supply of sulfur to consumers have been changed and sale on EXW and DAP terms has been introduced.

The benefits provided by the decree of the President of the Republic of Uzbekistan for exporting enterprises are widely used. Services for the transportation of sulfur from the Mubarek Gas Processing Plant (Mubarek Gas Processing Plant) to the border of the Republic are carried out by rail with a 50% discount compared to the tariffs established by Uzbekiston Temir Yullari JSC.

Since the establishment of effective sales of sulfur products on the market as of 1 May 2021, only 215.0 thousand tons have been shipped to consumers in accordance with the established procedure, of which 101.5 thousand tons were shipped in April. In the coming months, it is planned to organize the process of loading sulfur at a high rate.

The necessary work has been done to bring the sulfur loading process to such a high rate. The management of the Mubarek Gas Processing Plant (Mubarek Gas Processing Plant) organized the process of shipment of sulfur products in 2 shifts of 24 hours each, and also created the necessary conditions for more than 100 employees involved in the shipment process. In particular, in addition to providing workers with lunch, dinner and special clothing, more than 20 special equipment is provided at the sulfur shipment sites during the night and day shifts.

In the above processes, along with the workers and workers of workshops No. 5 and No. 17 of the Mubarek Gas Processing Plant, one can note the tireless work of the employees of the Commercial Department day and night.

Sulfur is mainly supplied to countries such as China, India, Turkey, Russia, Switzerland, Iran, Africa and Latin America. This indicates that the quality level is at the level corresponding to world requirements.