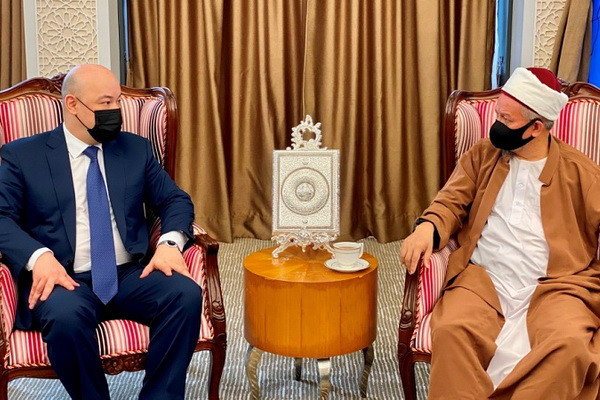 During the talks, the Malaysian side was familiarized with the purposeful work carried out in Uzbekistan to preserve and revive national, religious values, study and promote the rich scientific and spiritual heritage of great Muslim scientists and thinkers, as well as strengthen religious tolerance.

The sides was informed in detail about the tourism potential of Uzbekistan, the conditions created for carrying out ziyorat tourism to the world famous and revered Islamic shrines in the cities of Samarkand and Bukhara.

The minister highly appreciated the measures taken in the republic to strengthen educational work to clarify the humanistic essence of the Islamic religion, to promote interreligious, intercultural and interfaith harmony in the country. He welcomed the established active cooperation between religious research centers and clergy departments of Uzbekistan and Malaysia.

“Historically, such great scientists and theologians as Imam al-Bukhari, Imam at-Termizi, al-Matrudi, Naqshbandiy and others, who lived and worked in the territory of today's Uzbekistan, have made a tremendous contribution to the development of modern science and the progress of human civilization. They are widely known and deeply revered among the Malaysians,” he said.

Zulkifli Mohamad al-Bakri noted the interest in expanding cooperation with the relevant departments of the republic in the field of joint study of the rich scientific and cultural heritage of the religion of Islam and the development of ziyorat tourism in Uzbekistan.

The interlocutor said that the uniqueness of ziyorat tours to Uzbekistan lies in the fact that pilgrims will not only be able to get acquainted with the unique architectural monuments and Islamic shrines of the historical cities of the republic, but also have the opportunity to study the heritage of the great religious scholars and theologians of the Muslim world. In this regard, he expressed hope for an increase in the number of pilgrims from Malaysia to perform a small hajj under the special program "Umra Plus" before traveling to holy Mecca after the opening of the borders of Malaysia.

Zulkifli Mohamad al-Bakri noted with regret that Malaysians are currently unable to travel outside their country due to the current restricted movement regime due to the coronavirus pandemic.

In this context, as a groundwork for the future, the minister expressed his readiness to assist in the promotion of Ziyorat tourism in Uzbekistan during Friday prayers in mosques throughout the country, as well as in the preparation of special reports by the state Islamic TV channel TV Alhijrah under the Ministry of Religious Affairs. for wide acquaintance of the Malaysian audience with the unique possibilities of pilgrimage to the republic.

Following the negotiations, the parties agreed to further expand cooperation between religious research centers and clergy departments of Uzbekistan and Malaysia in the field of studying the scientific Islamic heritage, holding joint online conferences, seminars and studies of ancient manuscripts, organizing advanced training courses for teaching staff and exchange students, as well as delegations at the government level of the two countries and experts in various fields.