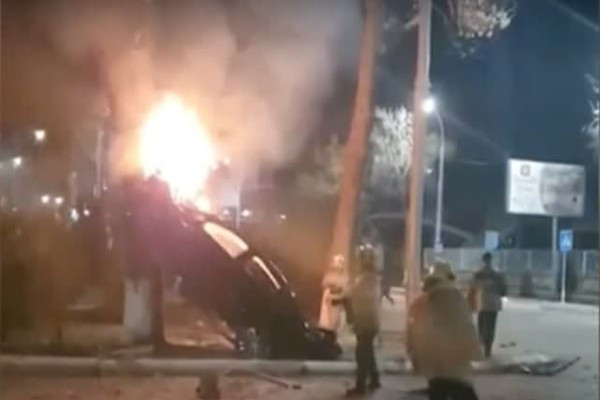 Tashkent, Uzbekistan (UzDaily.com) -- On the night of 28-29 November, a Malibu car caught fire in Tashkent after a road accident.

According to the Main Internal Affairs Directorate of Tashkent, on the night of 28-29 November at about 3.40 o’clock on Abdulla Qadiri Street, not far from the Ramada hotel, there was a traffic accident involving a Malibu car.

The car was driven by a 28-year-old Z.S. A 33-year-old N.F. was also in the car. According to preliminary information, the driver lost control and the car collided with a tree.

The drivers, who passed at that moment and who witnessed the accident saved the driver and his passenger. One of the eyewitnesses took the victims to the hospital.

According to doctors, the victims received minor bodily injuries, their condition is assessed as satisfactory.

After the driver and passenger were removed from the car, a fire broke out in the Malibu engine compartment. One of the witnesses reported this to the emergency number "101".

The fire safety officers immediately arrived at the scene and eliminated the fire.

At present, the Tashkent city police department is conducting an inquiry into the accident.