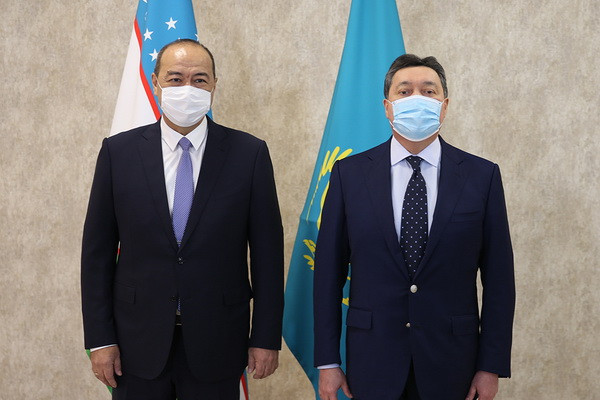 Particular attention was paid to the implementation of the Plan of Practical Measures to expand and deepen cooperation between Kazakhstan and Uzbekistan for 2020-2022, issues of creating a regional commodity distribution system, the International Center for Trade and Economic Cooperation on the Kazakh-Uzbek border, modernization of border checkpoints, etc.

Uzbekistan is the main trading partner of Kazakhstan in the Central Asian region. At the end of 2019, bilateral trade grew by 21.2% to $4.5 billion. The parties intend to increase trade turnover, bringing it to $10 billion.

The heads of government took part in the opening ceremony of the Kazakh-Uzbek joint venture for the production of textiles in Turkistan – Turkistan Textile. The garment factory is located on an area of 2 hectares in the Turkistan industrial zone. The volume of investments is 700 million tenge.

The design capacity of the production is 13 thousand textiles per month. The enterprise will create over 1,000 new jobs for women, including those with special needs. Mamin acquainted Aripov with new social, sports, transport and tourist infrastructure of Turkistan – an international airport, a congress hall, the Uly Dala Eli center, the Turkistan Arena stadium, the Schoolchildren's Palace, the Rixos Turkestan hotel, as well as the progress of construction of the multifunctional tourist complex Caravanserai and a mosque for 5 thousand places. T

he heads of government visited the mausoleum of Khoja Ahmed Yassaui, cultural and historical museum Azret-Sultan and laid flowers at the monument of Abai.