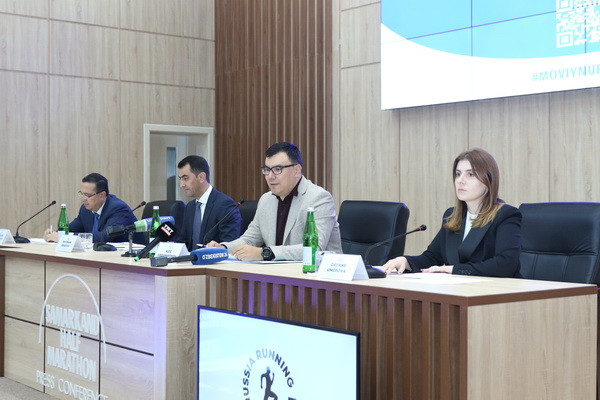 Tashkent, Uzbekistan (UzDaily.com) -- On 17 November, the results of the competition between cities and clubs were summed up. During the press conference, the organizers and partners expressed a mutual desire to continue cooperation, announced the winners and shared their impressions of the event.

A characteristic feature of the Samarkand Half Marathon is the participation of running clubs formed specifically to participate in the half marathon. Amateur and corporate running clubs formed by representatives of various companies and enterprises have become part of the gradually expanding running community of our Republic.

At a press conference, Aziz Abdukhakimov gave the first official figures at the end of the half marathon:

“According to the general statistics of the virtual race, more than 3000 people from 35 countries of the world are registered to participate in it. These numbers mean that people are not indifferent to what is happening around them. If the number of participants in our previous half marathon was 1200 people, then, as you can see, this year these figures have doubled and, I can say, they will continue to increase. Due to the large flow of people willing to contribute to charitable activities, we decided to extend the registration until 1 December. An increase in the number of registered individuals means an increase in funds going to help for people with autism. "

The executive director of the Foundation for the Development of Culture and Arts, the organizing party, noted that people have become much more willing to participate in charitable initiatives, which is directly related to the involvement in the project:

“Today we are summing up the results of the Half Marathon, and I want to say that this year we were pleasantly surprised by such a large number of participants, much more than expected for the online race. I am personally glad that Samarkand Half Marathon traditionally becomes a beautiful final event for the second year in a row, with its own positive energy, which only an event can have. We thank everyone who became involved in organizing the Half Marathon, and of course the participants and partners of the event for their participation and support.”

Also, Gayane Umerova announced the start of an open competition to find an architect who will create a design project for art studios in Tashkent and Samarkand.

During the press conference, the holding of new races in Jizzakh region and Bostanlyk district was announced.

For the first time this year, a new discipline was officially announced, which is gaining popularity in the world - Nordic walking (Nordic walking). A new Kids Race was added for children, in which children under 12 years old could take part.