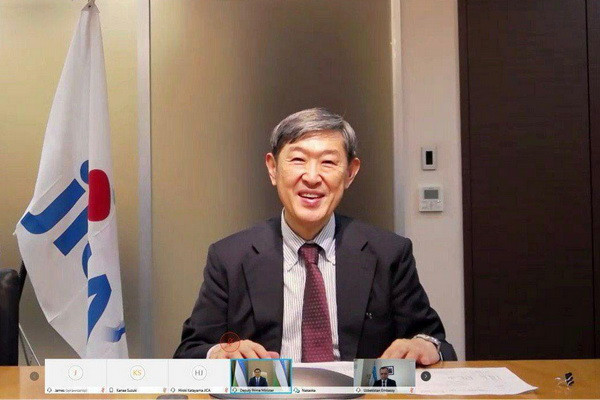 Tashkent, Uzbekistan (UzDaily.com) -- On 30 July 2020, a video conference was held between Deputy Prime Minister - Minister of Investments and Foreign Trade of the Republic of Uzbekistan Sardor Umurzakov and President of the Japan International Cooperation Agency (JICA) Shinichi Kitaoka.

Within the framework of the videoconference, issues of ongoing cooperation on the implementation of agreements reached following the high-level visit to Japan in December 2019 were raised. The priority of continuing systematic work on the implementation of common initiatives and projects in the context of the current epidemiological situation in the world was emphasized.

Projects in the field of energy, agriculture, as well as the development of the healthcare system in Uzbekistan were substantively considered.

The parties exchanged views on the need to further accelerate procedures within the framework of ongoing projects. The prospects for attracting additional funds from the Japanese financial institution for the implementation of projects in the fruit and vegetable sector were discussed separately.

It was also noted that funds within the framework of new projects will be used to effectively support the economy of Uzbekistan, in particular, to intensify industrial activity in the most demanded industries, support business activity of small and private businesses, as well as stimulate foreign trade and create new jobs.

Along with this, a high assessment was given to the desire of the Government of Japan to assist the countries of Central Asia and Afghanistan in ensuring regional stability and security, sustainable development and strengthening economic integration in the region. They expressed their readiness to strengthen cooperation in the “Uzbekistan-Japan-Afghanistan” format.

The Uzbek side came up with an initiative to consider the potential possibility of JICA’s participation in the implementation, together with the Investment Fund, planned to create, with the participation of the Central Asian countries and the US International Finance Corporation (USDFC), priority projects of regional importance, including in the field of improving infrastructure, developing industrial cooperation and support for small businesses and private entrepreneurship.

As a result of the videoconference, the parties agreed on the issue of organizing a visit to Uzbekistan for a JICA delegation to jointly develop new projects in order to expand bilateral cooperation.