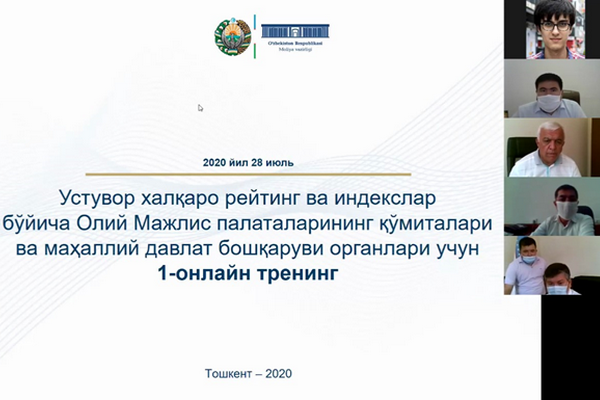 Tashkent, Uzbekistan (UzDaily.com) -- First online training on priority international rankings and indices for the Chamber of the Oliy Majlis and local authorities committees took place, the Uzbek Finance Ministry said in a statement.

At the level of State policy, the implementation of reforms aimed at further improving the standard of living of the population, increasing the prestige of our country in the international community, and developing an investment and business environment has now risen; including by improvement the performance of international rankings and indices according to generally recognized criteria.

Working bodies of the Republican Council responsible for International Rankings and Indices - the Ministry of Finance and Justice - have begun to jointly conduct a series of training sessions for the responsible ministries and departments and local authorities. The aim is to familiarize people with the legal, regulatory and methodological bases for their activities, to give an idea of the priority international rankings and indices in the socio-economic, political and legal spheres and their significance for the population of the country, official bodies and the general public, as well as cooperation with international organizations.

The first training was held on 28 July in online format. Local government officials responsible for international rankings and indices, senators and deputies representing committees of the Chambers of the Oliy Majlis participated in the webinar.

The purpose of event cycle is to bring together local authorities responsible for international rankings and indices to examine the role of each indicator in raising the profile of our country on the world stage, importance of establishing relations with international organizations-appraisers, problems encountered by the public as a result of  the legislative acts and decisions implementation, as well as measures to eliminate them.

Representatives of the Finance and Justice Ministries  informed the participants about the rankings and indices of the socio-economic, political and legal spheres, recent changes in this direction and related undertaking works.

At the webinar, it was noted that attracting foreign investment into the country provided a basis for increasing the number of projects aimed at improving the social and economic life of the population. Consequently, every State authority,economic administration and all its employees must attach particular importance to improving the Republic’s performance in international rankings and indices and carry out their activities in strict compliance with the law.

As a result of the training, the First Deputy Speaker of the Legislative Chamber of the Oliy Majlis of the Republic of Uzbekistan, Akmal Saidov, commented on the importance of political and legal indices in increasing social and economic ratings, their intrinsic relationship and the need to implement measures to expand the statistical database. He highlighted that the unlawful actions of some local government officials, which had a negative impact on the legitimate rights and interests of citizens, were damaging the image of our country in the international arena.