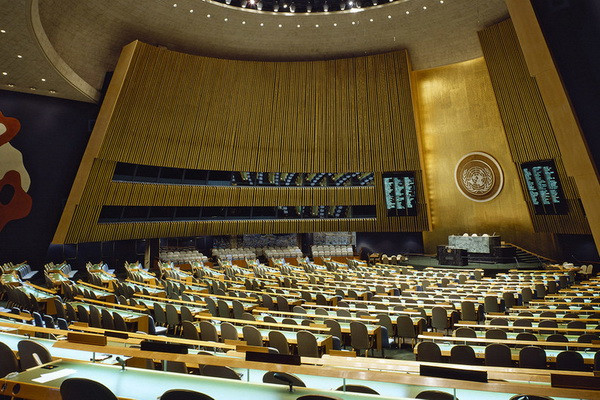 UN General Assembly to be held in online format

UN General Assembly to be held in online format

Tashkent, Uzbekistan (UzDaily.com) -- World leaders will submit pre-recorded video statements for the United Nations General Assembly session in September, the 193-member organisation has decided, as heads of state and government will not be physically attending the annual gathering due to the coronavirus pandemic and the high-level session goes virtual for the first time in the U.N.’s 75-year history.

The General Assembly adopted a decision on Wednesday that “each Member State, observer State and the European Union can submit a pre-recorded statement of its Head of State, Vice-President, Crown Prince or Princess, Head of Government, Minister or Vice-Minister, which will be played in the General Assembly Hall during the general debate of the Assembly at its seventy-fifth session, the high-level meeting to commemorate the seventy-fifth anniversary of the United Nations and the high-level meetings...after introduction by their representative who is physically present in the Assembly Hall.”

While taking the decision, the General Assembly noted “with concern” the situation regarding the coronavirus pandemic and the “limitations recommended on meetings within the United Nations premises as precautionary measures aimed at containing the spread of COVID-19”.

Telecommuting arrangements have been in place at the U.N. headquarters since mid-March as coronavirus spread rapidly across New York, making the state the epicentre of the pandemic in the U.S.

The U.N. headquarters began its first phase of re-opening on July 20, under which no more than 400 people will be allowed to be present at the premises on any given day, in order to minimise the risk of exposure to the virus and to allow for physical distancing. Those present in the premises will have to follow strict social distancing guidelines.

The U.N. has said that given the evolving nature of the situation and the many remaining uncertainties regarding COVID-19, the transition from one phase to another may not be linear and at any time could revert to a previous phase.

In phase 2, the UNHQ occupancy will gradually increase from 10 to 40%, while phase 3 or the “new normal” is being designed and will draw on lessons learned from the earlier phases.

The General Assembly meeting to commemorate the 75th anniversary of the United Nations will take place on 21 September and the Declaration will be formally adopted at the meeting.

On 30 September - Summit on bio-diversity

Member states will submit their pre-recorded video statements for these meetings as well. Each country would be encouraged to observe the time limit of 15 minutes in the General Debate that would include remarks in the Assembly Hall to introduce the pre-recorded video and the video itself.

General Assembly President Tijjani Muhammad-Bande told member states that with a view to limit the footprint and the number of people into the U.N. building, physical access and presence will be limited to one or, if the situation allows, two delegates in the General Assembly hall. Further, he said member states “are encouraged to move all side events to virtual platforms to limit the footprint and number of people in the UN building“.

The General Assembly session had particular significance this year as it would have commemorated 75 years of the existence of the United Nations and would have seen tremendous participation from leaders of the 193 member states to mark the anniversary.