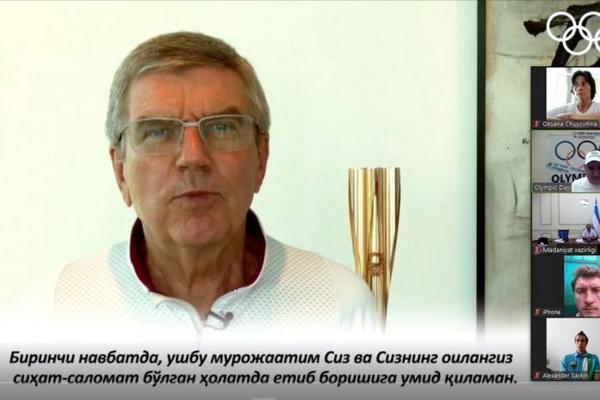 Tashkent, Uzbekistan (UzDaily.com) - 23 June is International Olympic Day. On this day, the International Olympic Committee (IOC) was founded and it should be noted that this historical date is widely celebrated in all countries of the world. Due to the widespread coronavirus pandemic, the 2020 Tokyo Olympic and Paralympic Games were postponed to 2021.

One of the key initiatives developed for the development of the state, improvement of the population and future youth, is focused on the development of sports, namely, on creating broad opportunities for the full leisure of our people in mass sports and physical education, and promoting a healthy lifestyle among the population. Now, in connection with quarantine, many countries of the world are experiencing economic difficulties, it was especially difficult for athletes and coaches. But thanks to the policy of Our Dear President, we can say that such problems and difficulties did not affect our athletes.

This year, in connection with the pandemic, the “Olympic Day” holiday is being held online, but despite this, all residents of the country, the participants in the event are very happy. Today, the first Olympic Day event was held on the ZOOM platform. The event was attended by the President of the National Olympic Committee of Uzbekistan Rustam Shaabdurakhmanov, First Deputy Minister of Physical Culture and Sports Ravshan Irmatov, representatives of the Ministry of Culture, the leadership of federations and associations of Olympic sports, athletes and trainers, folk artists of Uzbekistan - Yodgor Sadiev and Erkin Komilov, honored artist of Uzbekistan Samandar Khamrakulov, as well as veterans of Uzbek sports.

The first at the online event were Ravshan Irmatov and the Secretary General of the NOC Oybek Kasimov. Further, words were given to famous athletes who, at the Olympics, with their worthy performance, raised the flag of Uzbekistan high - Oksana Chusovitina, Muhammadkadyr Abdullaev, Armen Bagdasarov, Ihtiyor Navruzov, Murodzhon Akhmadaliev, Khusniddin Norbekov, etc.

It should be noted that the famous artists of Uzbekistan Yodgor Sadiev and Erkin Komilov also congratulated all participants and athletes on the International Olympic Day. At the end of the event, the organizers showed a video with the message of Thomas Bach, in which the head of the IOC sincerely congratulated everyone on the holiday.

The National Olympic Committee of Uzbekistan began to celebrate the event "Olympic Day" from June 15. On this day, a virtual running program was launched, in which about 500 of our compatriots took part. The competition will last until 22 June.